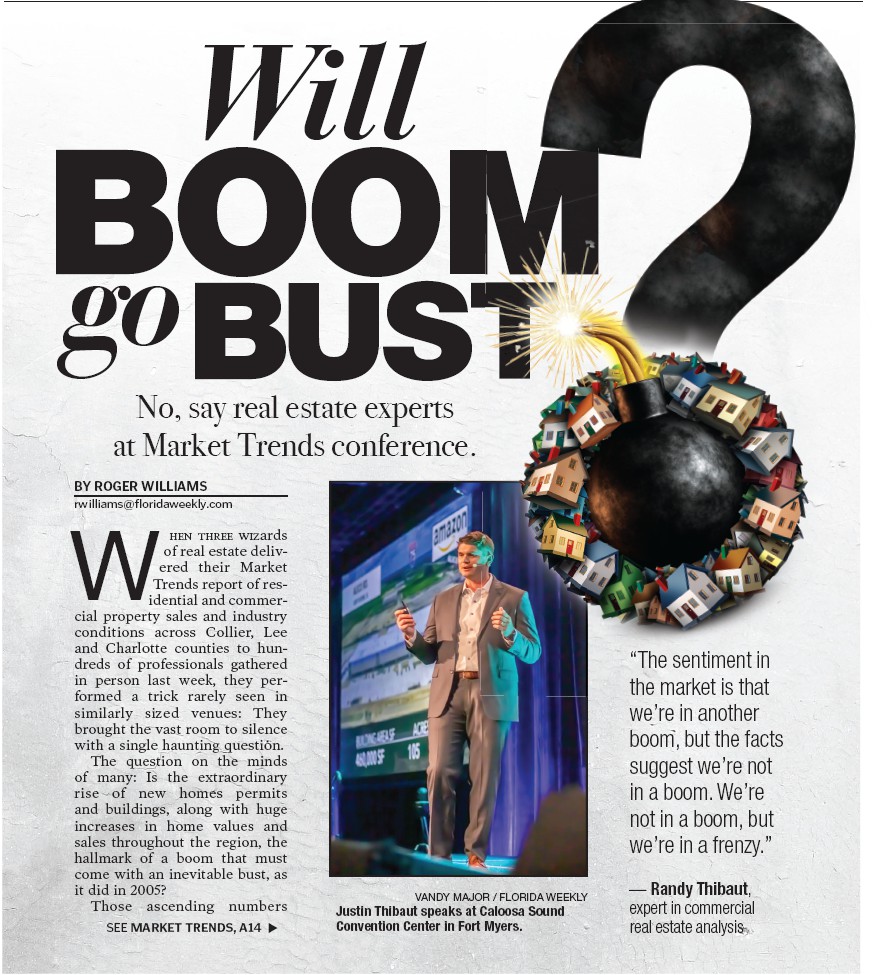 WHEN THREE WIZards of real estate delivered their Market Trends report of residential and commercial property sales and industry conditions across Collier, Lee and Charlotte counties to hundreds of professionals gathered in person last week, they performed a trick rarely seen in similarly sized venues: They brought the vast room to silence with a single haunting question. The question on the minds of many: Is the extraordinary rise of new homes permits and buildings, along with huge increases in home values and sales throughout the region, the hallmark of a boom that must come with an inevitable bust, as it did in 2005?

Those ascending numbers have been combined with rapidly escalating costs of land and materials in residential and commercial construction and 2.2 million square feet of commercial space rising anew in Southwest Florida.

One could have heard a proverbial pin drop as the crowd awaited an answer at the Caloosa Sound Convention Center overlooking a Caloosahatchee River sunset, flanked by a bustling downtown Fort Myers. 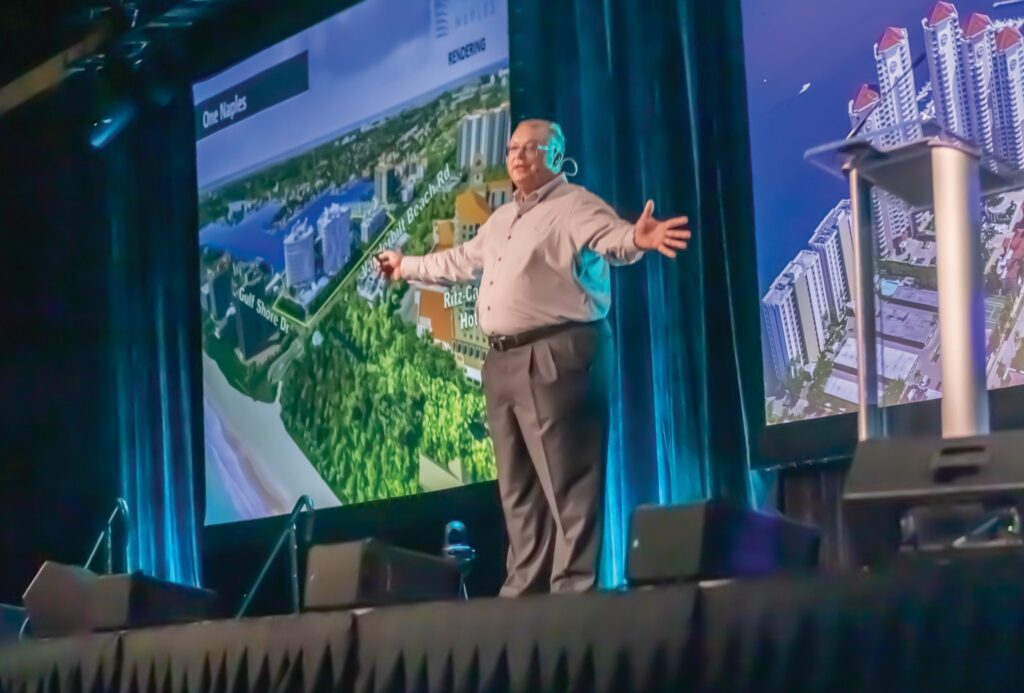 “Now, things are good — and things are challenging because our labor and supply is so limited,” according to Randy Thibaut. VANDY MAJOR / FLORIDA WEEKLY

Make no mistake, the experts say, booms come with “corrections,” sometimes a nice word for “busts.” Everybody else knew that, too. Traditionally it happens about every seven years, and so far this market has grown steadily for roughly a decade following at least four years of suffering following the worst bust since the Great Depression, beginning roughly 15 years ago.

So one more time: Does this buoyant market now point to bust?

The answer — a statistics and fact-based explanation from veteran researchers and market analysts who presented their in depth research at the event — is, “No.” A link to see the newest Market Trends report, dated Sept. 9, is here: www.markettrendsswfl.com/ digital-data-book-fall-2021/.

No, because the region is not experiencing a boom, said Randy Thibaut, CEO, co-owner and founder of LSI Companies, which specializes in commercial, residential, agricultural and industrial markets across the region. 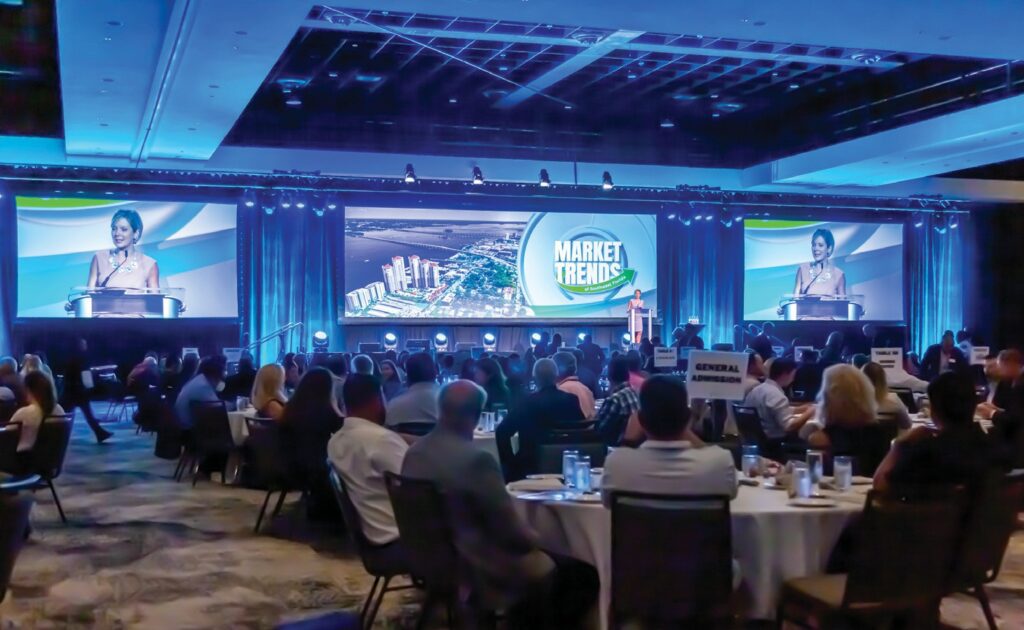 He joined Justin Thibaut, LSI Companies president and an expert in commercial real estate analysis and transactions, and Denny Grimes, a residential expert and president of Denny Grimes & Team at Keller Williams Realty, to explain why.

Although growth has been explosive in some markets, with home prices or price-per-square-foot for commercial space doubling or more, and days on market dropping precipitously, other data suggests a more reassuring reality, he added.

And that’s in a year when Americans and Floridians have faced political unrest, tense international relations, and especially an aggressive virus that isn’t finished with us yet. 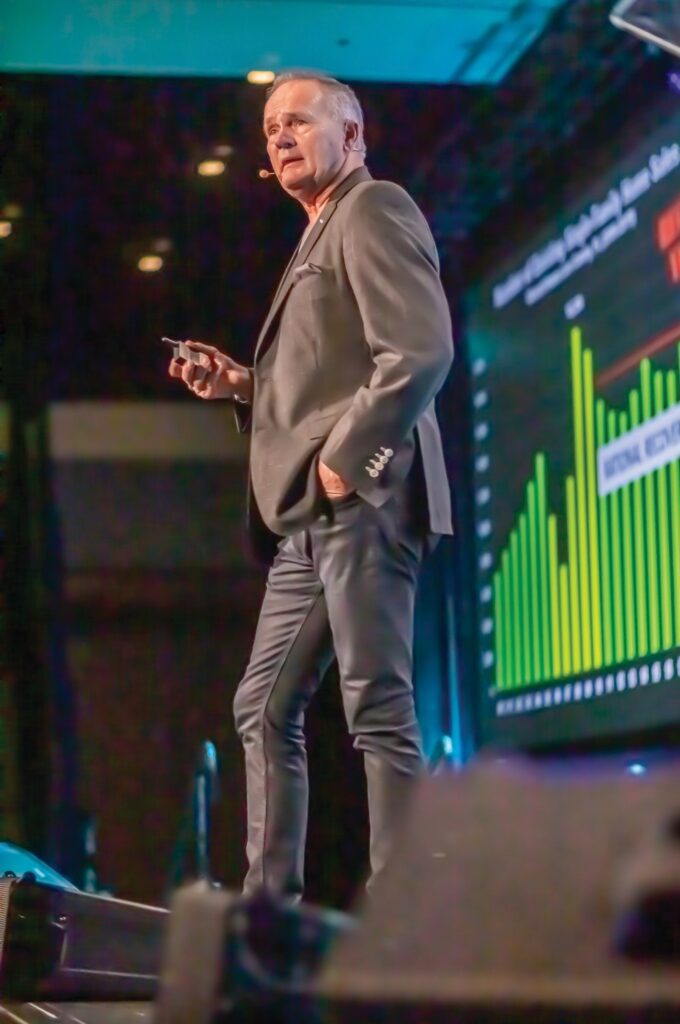 Citizens of Southwest Florida must recognize the three assets we have, and protect them, Denny Grimes cautioned: “Water, Warm Weather and Way of Life.”

“So all that’s outstanding in spite of the pandemic. You would have thought we’d be in a significant downturn. But 23,000 is far from 45,000, so the good news is: We don’t have the makings for a crash.”

Water, warmth and way of life

But we have the makings for cautious, careful optimism, suggested Denny Grimes, who grew up in Fort Myers and has worked in residential real estate for 35 years in the region.

“The panic (buying) frenzy is over,” Mr. Grimes noted. “The market is slowing. Which is good.”

Odd as it may seem at first to hear a Realtor say a slowing market is good, Market Trends has become an invaluable and highly respected resource and guide across the industry in the region, which is why its audience included not just people practicing real estate, such as Syd Kitson, founder and developer of Babcock Ranch, a man described by Randy Thibaut as “visionary,” but county commissioners such as Lee’s Frank Mann, along with elected and appointed officials, builders and business owners from every walk of Florida life.

As he has before in explaining the charm of the region and perhaps the huge influx last year and this one of buyers arriving from the Northeast, the Midwest and even from California, Mr. Grimes quoted Thomas Edison.

“There is only one Fort Myers in the United States,” Mr. Edison once famously said, gladdening the hearts of chambers of commerce here for decades to come, “and there are 90 million people who are going to find it out.”

He might have included Marco Island, Naples, Punta Gorda and Port Charlotte in that prediction, but the point still seems well taken — that is, as long as citizens here recognize the three assets we have, and protect them, Mr. Grimes cautioned: “Water, Warm Weather and Way of Life.”

With other speakers, including Matt Walsh, editor and publisher of The Business Observer, who appeared customarily bow-tied in a prerecorded on-screen visual to introduce Market Trends, Mr. Grimes suggested that even with changing buyer profiles that are now moving the market toward more rentals and different locations — people spending in the half-million-dollar range for homes in Lehigh or Golden Gate, or looking to develop far east of I-75 in communities of single-family homes that can sometimes be built new solely to rent, not sell — voting for politicians who will protect “freedoms” and low-tax business interests, such as Gov. Ron DeSantis, is a key to a future growing market.

“Everything expensive in our market has been selling at record levels, and the most affordable properties are the slowest performers. That suggests the buyer profile has changed,” he said.

“The buyer profiled in a year will depend on what we decide to do. There have always been people who want to move here, particularly from red states, open states. People now are more motivated to leave where they’ve been.”

It’s no longer about “location, location, location,” Randy Thibaut added. Now it’s about where room exists with affordability, for many. Not the affordability of someone who put a long vacant lot abutting the Gulf waterfront in Naples on the market for millions almost a decade a go, then finally sold it in March for close to $14 million to a buyer who turned it over for more than $18 million last month — not that kind of affordability — but this kind, said Mr. Grimes: “There has been a 900% increase in homes over $300,000 for sale or sold in Lehigh Acres.”

High numbers can be found in parts of Cape Coral or Golden Gate or east in Charlotte County, too.

“Those are crazy numbers,” he said. “That’s why I call it a market in a million. It won’t happen again. So I don’t want to have a conversation about how good things are, I’d rather talk about how quickly they can change if we’re not careful.

“We need to agree why people are coming here, and protect that. We have warmth, we have water — we don’t want battles about that.

“But our way of life is being challenged too, and people are attempting to pollute the way we live. So it matters if we keep kids in schools. It matters if we (vote for politicians) who support our freedoms.”

All the good news — no bust in sight, but a residential market steadying for the long term and relying on continued growth — is matched in the commercial sector, which is nevertheless easy to misunderstand at first glance, explained Justin Thibaut, an expert in commercial real estate analysis, land development and vertical construction.

One might think this was primarily industrial development, but the reality is more complex, reflecting changes in the culture, he said.

“Half of that huge jump is retail investment sales. That was surprising to us so we broke it down.

“The biggest message now is everything is up across all three sectors, including construction, rents and occupancy. It’s about 98% across the board) up high.

“That’s pushing all the construction — 2.2 million square feet started in last year. The big news in that sector, construction, is, that’s just in a couple facilities — large scale facilities that hit our market.”

The reason? “E-commerce. We’re feeling it real-time in our market.”

The facilities are huge distribution warehouses form which goods can be distributed to people who make online purchases.

“The biggest issue in all types of retail is labor shortages. We have identified what we call the survivors and drivers: service retail business that have to be brick and mortar, such as places to get oil changes, hardware stores and the like.

A cap rate — capitalization rate — indicates the calculated rate of return predicted to be generated on an investment property.

Another striking trend is the exodus of large users from mall space — “and they’re not just shifting into e-commerce,” he said.

“Chicos, for example, has always been in a mall, an open-air shopping center. But now they’ve shifted not only to e-commerce but to a small retail footprint. Our overarching message there is to focus on the past. Identify existing facilities with small-footprint retail — with one-stop-shop imbedded.”

Meanwhile, office environments and their leases are in flux, as businesses and employees decide how important the old way of doing office business is, or if they want to.

Tourism is up again, he says, even without foreign visitors, and thus the beach resort world is expanding with several major projects, while luxury condominium plans are in the works too, up and down the coast.

In conclusion, the younger Thibaut says, “a lot of these numbers make it feel like we’re on a rush, it’s not going to end, there will be no hiccup whatsoever.

“But things like lease renewals in the office world, apartment stabilization, industrial delivery — how many more of these can we absorb?

“So dive into the facts, keep your finger on your (facts) pulse,” he suggested.

Advice reflected in the wisdom of his elders, too

Looking ahead, said Randy Thibaut, “the second round of COVID and what happens if it tapers off is yet to be determined. We’ll have some clarity on that in February at our Market Trends event.

“Now, things are good — and things are challenging because our labor and supply is so limited. We have ourselves in a situation where we may be hitting the price wall for new housing, because prices have risen so rapidly.”

Asked for advice for home buyers and home sellers, he replied with characteristic candor: “Advice for the buyer? The best time to buy was a year ago. Advice for the seller? You should have started a year ago, and if you still want to, now is the time.” ¦

Top five developments with most residential units permitted in 2021: