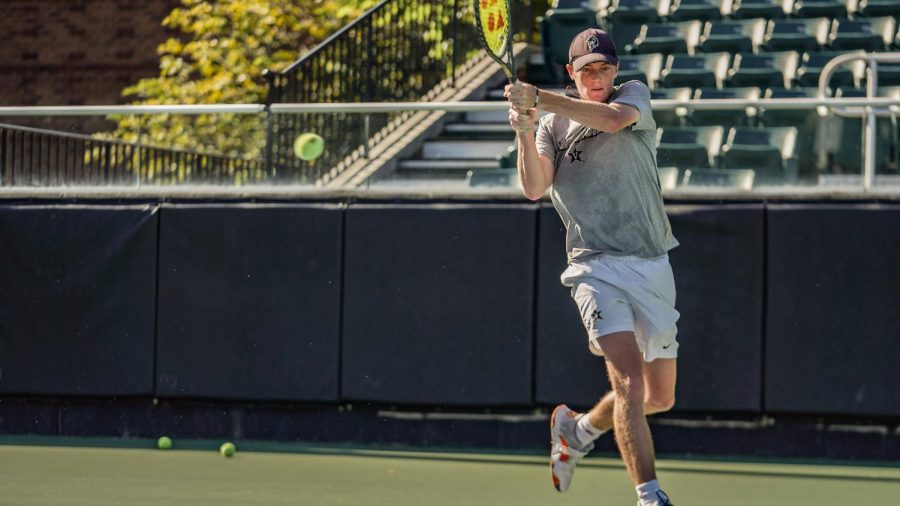 Coach Ian Duvenhage speaks on the new season, an experienced roster and talent from the transfer portal.

The Vanderbilt Commodores open their season this coming Friday at the Auburn Invitational. (Vanderbilt Athletics).

Coming off a difficult year for the program, the Vanderbilt men’s tennis team is looking to change the narrative in the 2021-22 season. With an infusion of talent and the advantage of continuity, they may just be able to do so.

The Commodores started their 2020-21 campaign strong, with four non-conference wins to start the spring. But the team slumped afterwards, going 2-16 to finish the year against tough SEC competition and a number of other challenging non-conference matchups.

Vanderbilt’s final record from last spring was 6-16 (0-12 SEC), but the team was resilient and scrappy in the face of defeat. Notably, the Commodores pushed major contenders to their limit in matches against the No. 1 Florida Gators and the No. 16 Mississippi State Bulldogs.

The team now looks to close the gap on their competition and build consistency in the new year, which will be aided by the experience of the roster.

“We have pretty much the same team back from last year, which is a great luxury,” head coach Ian Duvenhage said. “We have two fifth-year seniors [George Harwell and Max Freeman] … and to have them back is great.”

In addition to the experience up top, many of the younger players have shown signs of translating their hard work into results, even in the early stages of practice.

“I feel like some of our players from last year have made a significant jump. In particular, Joubert Klopper is playing much better and so is Connor Robb-Wilcox,” Duvenhage said.

Klopper, a junior, led the team last year with a 13-10 record in singles playing the No. 5 and No. 6 spots, while sophomore Robb-Wilcox went 4-8 in singles and 4-7 in doubles.

Though continuity and experience are great assets for the team, they will also benefit from new talent, including one transfer student from the University of Minnesota—Siim Troost.

“[Troost] is an All-American who got to the NCAA quarterfinals in doubles last year,” Duvenhage said. “We just started practice on Monday, but I really like what we’ve seen from him.”

Troost, a junior from Estonia, finished 7-11 in singles and 13-8 in doubles last season. He and his partner Vlad Lobak were ranked as high as fourth in the country in doubles. Troost also upset the No. 1 seed of the NCAA doubles tournament, earning All-American status along the way.

There is also an incoming first-year with a family connection to Vanderbilt tennis.

“We also have a freshman from Charleston, South Carolina—Michael Ross, whom we expect great things from. His sister Anna is actually on the women’s tennis team as well,” Duvenhage said.

As the world continues to battle the COVID-19 pandemic, the Commodores are feeling the impact themselves after a relatively safe 2020-21. Duvenhage confirmed that the team has already been battling a pair of COVID-19 positive cases in the days leading up to practice.

“Last year we got through the whole year without a single positive [COVID-19 test]. This year, we get two before practice officially starts,” Duvenhage said. “It just reminded us of how important it is to mask up and protect the bubble.”

Amidst these circumstances, the Commodores will compete in a variety of invitationals as well as Intercollegiate Tennis Association (ITA) events during the fall season.

The first matches take place at the Auburn Invitational from Sept. 17-19. Auburn, Clemson and Miami’s men’s tennis teams will all be participating.

Next up, the team will compete at the ITA Ohio Valley Regional Championship held in Knoxville, Tennessee, from Sept. 23-27.

With the opportunity to have fall competition, unlike last season, the team will look to incorporate its experience and new talent to make its presence felt early.

“I think we’re going to be a much better team, and obviously, we need to be,” Duvenhage said.

Their journey starts this Friday, Sept. 17, at the Auburn Invitational.