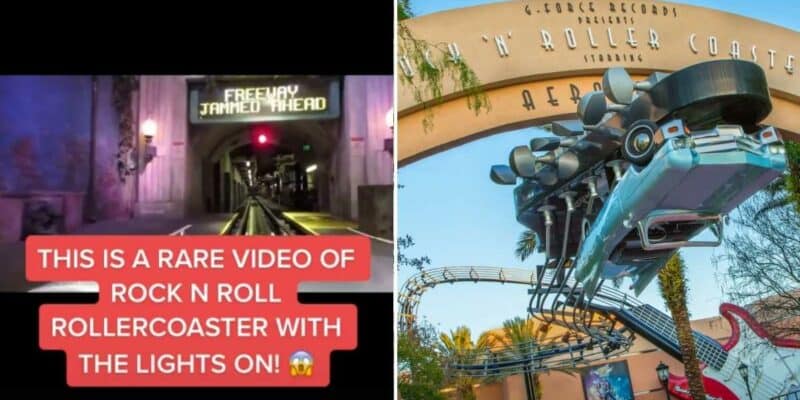 A huge part of any Walt Disney World vacation is the attractions. There is a variety of thrill, family, and water rides across Magic Kingdom, EPCOT, Disney’s Animal Kingdom, and Disney’s Hollywood Studios. Often boasting huge wait times, indoor dark rides like Space Mountain in Tomorrowland, and Rock ‘n’ Rollercoaster in Hollywood Studios are some of Disney’s most popular attractions.

Riding the coaster in the dark is, arguably, the main draw when it comes to the notoriety of these thrilling attractions but sometimes Guests get to experience them with the lights on. This viral video of the Aerosmith-themed ride with the lights on has fans calling out for the lights to be turned back off.

Nestled away near The Twilight Zone Tower of Terror at Disney’s Hollywood Studios, Rock ‘n’ Rollercoaster Starring Aerosmith is a staple attraction for any Guest seeking a thrilling coaster-based ride while on their Disney vacation. Taking place in the dark against a soundtrack of Aerosmith’s greatest hits, Rock ‘n’ Rollercoaster is one of the fastest rides on Disney Resort property.

While Hollywood Studios is also now the home to Toy Story Land and Star Wars: Galaxy’s Edge — which themselves have popular rides like Slinky Dog Dash and Star Wars: Rise of the Resistance, respectively — the 1999 Walt Disney World ride still attracts many Guests for its high-speed launch and in-the-dark experience.

Despite its longevity at the Disney Park in Orlando, Florida, Rock ‘n’ Rollercoaster, as with many of the Parks attractions, does have the occasional technical difficulties. Recently, the Hollywood Studios ride broke down leaving Guests stuck on the “highest hill” before being evacuated. This video captured parts of the super-fast attraction with the lights on but now a recent viral video shows more of the rollercoaster, revealing just how close some of the elements are to the riders, and what actually happens right after launching off at high speed.

Rock ‘n’ Rollercoaster with the lights ON!

Sharing to TikTok, user Everything Disney (@everythingdisney133) revealed the Rock ‘n’ Rollercoaster ride with the lights on in, what they are calling, a rare video.

In the footage, you can see that the usually dark ride is illuminated, and as the vehicle launches and exits the tunnel, another coaster vehicle sails past right above the camera. The sound blasted through the seats would usually cover this close encounter with another ride vehicle but due to the lights being on, fans were able to see it up close and personal.

You can watch the video below.

The TikTok video has racked up almost 6 million views since it was posted just two days ago and other fans of the Walt Disney World Resort attraction took to the comments to share their views on this thrilling lights-on version.

One user highlighted their feelings by stating that “Disney rides with lights on that aren’t supposed to have lights on horrify me for some reason”. You can see why, while there is a certain thrilling element of riding a coaster with no track visuals due to the darkness, it’s an altogether different experience to see what you aren’t meant to see. Another comment echoed this thought saying, “rollercoasters with lights on are actually terrifying”, while someone else noticed the close proximity of the track’s structure — “…if I knew how close everything was to my head I would’ve never gotten back on that ride”.

It should be noted that regardless of how close parts of the track seem to be to the riders, Disney’s Rock ‘n’ Rollercoaster is a safe attraction to experience.

There are many other attractions that Guests have experienced with the lights on like Peter Pan’s Flight, Haunted Mansion, Space Mountain, and Pirates of the Caribbean. And if you’re a Universal Studios Hollywood fan, Jurassic World — The Ride also showcased its dinosaurs with the lights on.

Have you ever rode any attractions with the lights on at a Disney theme park? Were they scarier? Let us know in the comments below!