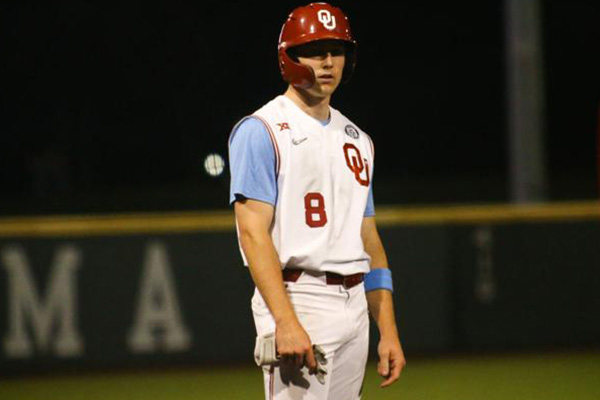 Starting on the Cape, Oklahoma transfer Jace Bohrofen was named an All-Star this week for the Falmouth Commodores. The outfielder from Oklahoma City is hitting .304 with a .582 slugging percentage, 5 home runs and 16 RBI.

Bohrofen’s average (minimum of 20 at-bats), home runs, RBI and stolen bases (6) are the most on the team. He ranks third in the league in homers and fourth in stolen bases and RBI.

While All-Star rosters were announced, the All-Star Game, which usually takes place at Fenway Park, was not scheduled to be played this year due to precautions with the covid-19 pandemic. Even without the game, Bohrofen has valued the reps he’s gotten in the Cape Cod league.

“Everyone’s talented, so you’re really going to see the guys that can really dig their foot in, grind and then see who wants to be the better player and come out on top,” Bohrofen said in an interview with Will Kharfena on the Commodores website.

Arkansas outfielder Cayden Wallace, who also plays in the Cape Cod League, was not selected to the All-Star roster. His average has slipped to .290, and his 22 strikeouts lead the team.

Will McEntire was named an All-Star in the Northwoods League. The Duluth Husky has continued his strong performance this summer with a 2.35 ERA in 8 appearances. He has yet to be hit with a loss (3-0) in 38 1/3 innings this year.

During the All-Star Game, he pitched one inning in relief, struck out two batters and did not give up a hit or run.

In the California Collegiate Summer League, Miller Pleimann, Heston Tole, Gabe Starks and Zack Gregory made the showcase game. Thirty players were chosen for each team and players worked out before the game for MLB scouts.

The game was broadcast on Bally Sports TV in some markets, and was scheduled to be replayed multiple times in July and August. Matt Jones wrote a recap on what their summer seasons have looked like so far, and you can find that here.

In two relief appearances last week, Zack Morris pitched 7 innings, gave up 1 run and struck out 9 batters for the Orleans Firebirds of the Cape Cod League.

In the second game against the Yarmouth-Dennis Red Sox, the left-handed pitcher from Cabot threw 5 2/3 innings of relief, giving up 1 run and striking out 8 batters. Including the spring, it was Morris’ longest out of the year.

The appearances lowered Morris’ ERA to 1.90 in seven games for the Firebirds. He had a 4.80 ERA in 16 appearances for the Razorbacks last year.

The USA Collegiate National Team’s summer season ended at the beginning of this week. The collegiate team played a three-game series against the Olympic team to end the season.

The Olympic team’s roster consists primarily of minor league prospects. The collegiate team lost all three games of the series.

Arkansas infielder Robert Moore played in two of the games, going 1 for 6 with a run scored and this single.

In his one appearance against the Olympic team, Jaxon Wiggins pitched 1 2/3 innings and gave up 2 hits, 1 run and 3 walks while striking out 1. The run he gave up was the only run the Olympic team scored in the 1-0 win.

Moore and Wiggins are supposed to join teams in the Cape Cod League.

Arkansas pitchers Nathan Rintz and Corey Spain have been playing in South Florida for the Delray Beach Lightning this summer, and both have put in the majority of their time as starters.

Rintz has a 1-1 record with a 3.20 ERA in 7 games, all starts. His best performance was a five-inning outing at the end of June against the Pompano Beach Clippers in which he gave up 3 hits, walked 2 batters and struck out 4 without giving up a run.

Spain earned his first win of the season in his last outing against Palm Beach Diamond Ducks. He pitched 4 innings of shutout ball, giving up 2 hits, 2 walks and striking out 5.