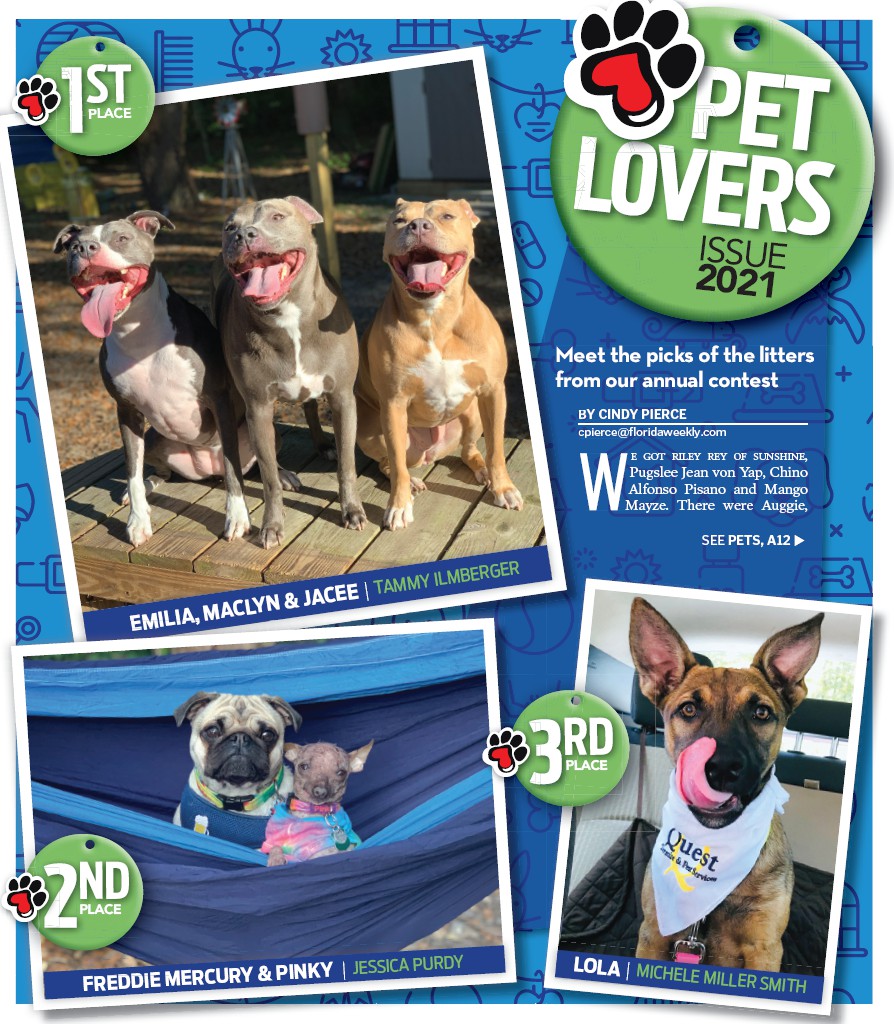 There were pairs, threesomes, foursomes and more: Wrigley and Duncan; Banjo and Dolly Pea; Dougie and Jack; Moose and Bruno; Sampson and Tatonka; Rocket and Pooh; Molly, Casey and Cody; Majesty, Annie and Nugget; Lulu, Charlie, Jimmy, Ralph and Maddie; and Eeny, Meeny, Miny and Moe.

The vast majority were dogs and cats, but we also got Frieda the tortoise, Penelope the mini pig, Lizario the leopard gecko, Guinea pigs that go by Giggles McDimples and Fluffy, a snake aptly called Rocky BalBOA, a handsome horse named Flex, a pair of rabbits named Hopper and Snowflake, and a pretty bird called Patty Cakes.

When the judges had their say in Florida Weekly’s 2021 Pet Lovers photo contest, however, it was the dogs who had their day. 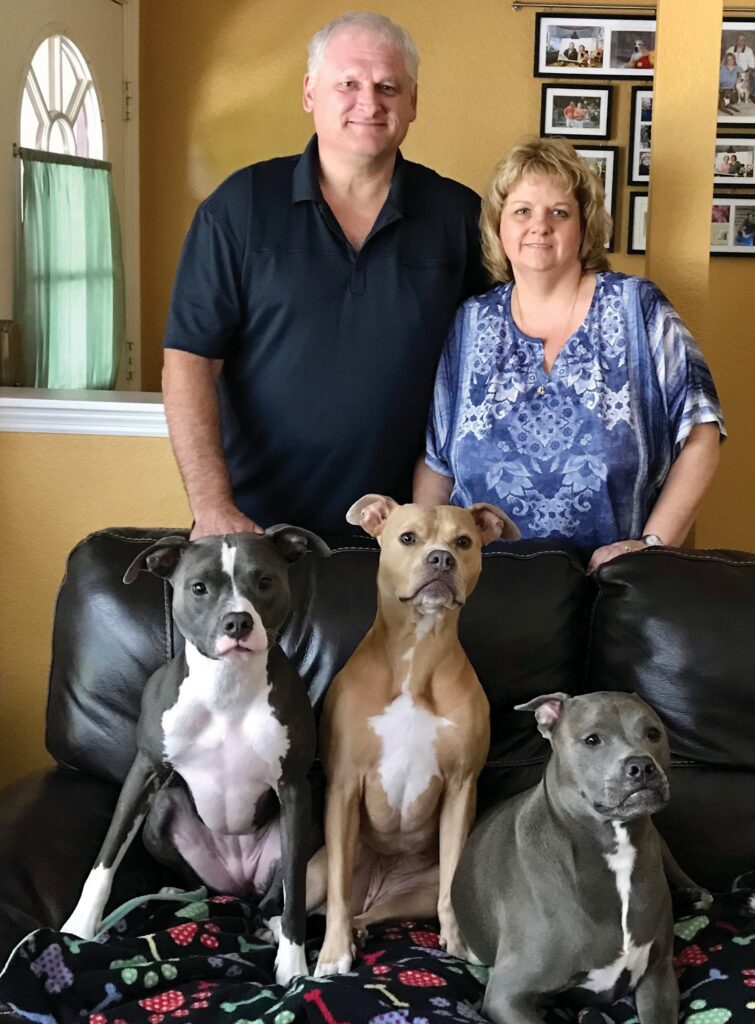 Our editors scoured hundreds of entries from Naples to North Port and chose pups for all three of this year’s favorites. Thanks to all who sent pictures of their animal companions, and congratulations to Tammy Ilmberger of North Port, Jessica Purdy of Fort Myers and Michele Miller Smith of Bonita Springs for their top dogs.

JaCee, MacLyn and Emilia are the fifth, sixth and seventh pit bull mixes adopted by Tammy and Rick Ilmberger.

“We got the first one in 2001 from the Animal Welfare League of Port Charlotte. She started it all,” says Tammy.

The couple has only adopted females. Although some of their previous adoptees were older, all three of the Ilmbergers’ current canine beauties came to them as very young puppies.

JaCee and MacLyn joined the family seven years ago, about one month apart and at about the same age. “We think they were around 4 months old,” Tammy says. 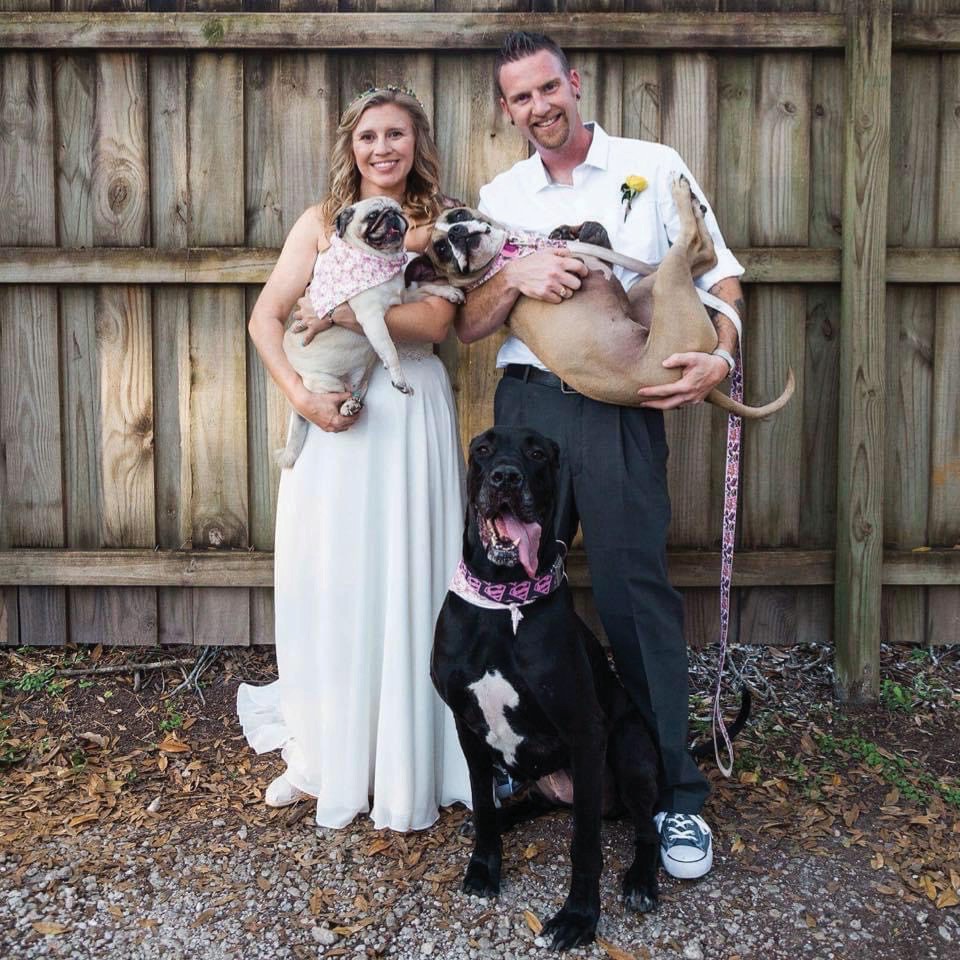 Left: Jessica and Dirk Purdy on their weddingw day with Lola the pug, Ellie the boxer mix and Maci the Great Dane. Lola and Maci have since crossed the rainbow bridge.

JaCee came first, having been rescued by the Englewood Animal and Rescue Sanctuary from a kill shelter in Miami. “Our vet, who had a friend who volunteered at EARS, told us about this tiny little puppy that had arrived,” Tammy says. Seven years later, JaCee is living her best life. “We still stay in touch with the EARS volunteer who brought her over from Miami and who would have kept her had we not wanted her,” Tammy says.

MacLyn was born at the Animal Welfare League in Port Charlotte, where Tammy “saw her in the cage and knew instantly that she would be coming home with us.” She’s named in part for the late Macaroni (Mac for short), whose owner runs a pit bull rescue organization in Missouri.

“We have followed Mac’s Mission on social media for years,” Tammy says. “They do incredible, unbelievable things in the pit bull community.”

MacLyn was born with luxating patellas and has had surgery to place metal plates and bolts in both of her back legs. “She gets around, though,” Tammy says. “She runs and plays with the others, but she knows when she’s had enough.” 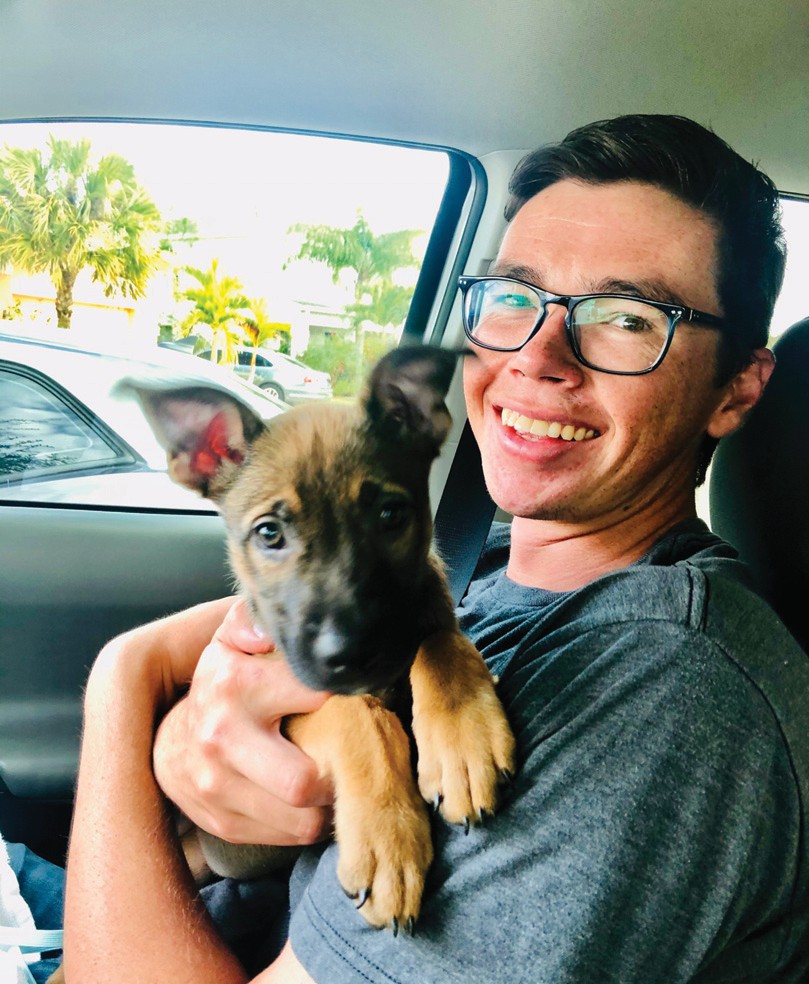 Garrison Smith with Lola on Valentine’s Day 2020, the day he gave the shepherd mix puppy to his mom.

Emilia weighed in at just 6 pounds when Tammy found her — or when she found Tammy — at an adoption oport event at PetSmart in Port Charlotte five years ago.

“We weren’t even going to look at the adoptable dogs,”” TTammy says. “We were there to buy treats after a trip to the vet.” But she heard a stressful yelp and turned down an aisle to see a young boy poking a feathery cat toy on a stick into a crate. The tiny puppy inside was cowering.

“When I heard the boy’s mother say she thought they could take the puppy home, I told the person in charge of the adoption event that I wanted to hold that puppy. As soon as she was in my arms, I knew …”

Tammy didn’t hesitate to tell the mother that her son wasn’t ready for the responsibility of a puppy. 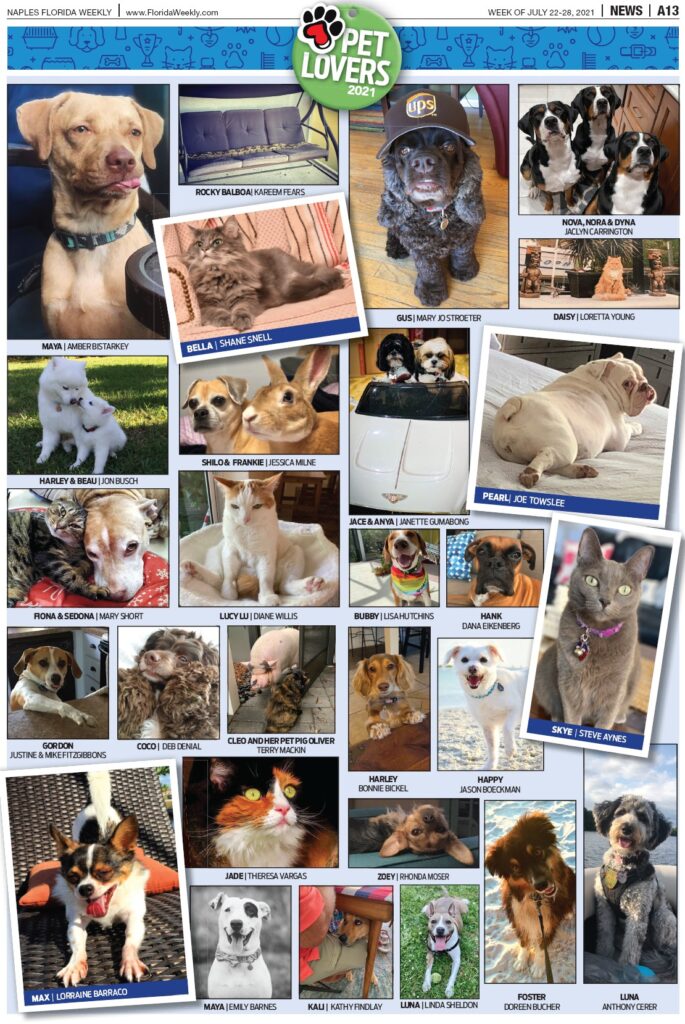 “Rick found me holding her a few minutes later and just threw up his hands,” she says. They agreed that another pit bull puppy had found a forever home.

DNA testing has showed that JaCee, MacLyn and Emilia are all dominant pit bull mixes but are not related in any way. “They’re just sisters by heart,” Tammy says. “We call them our girls.”

The winning photo of the girls was taken in the Ilmbergers’ backyard, where Rick has built all sorts of things for them to play on and with. They even have their own 2-foot-deep swimming pool.

They also have their own Facebook and Instagram pages (The Suncoast Pitties) with some 2,000 followers, Tammy says.

The Ilmbergers won $100 for their first-place photo and plan to donate the prize to EARS.

Two of a baker’s dozen

Freddie Mercury and Pinky are two of 13 rescue dogs that rule the world of Jessica and Dirk Purdy. They all live with the Purdys at Your Canines Come First, the dog boarding facility the couple owns and operates near downtown Fort Myers. 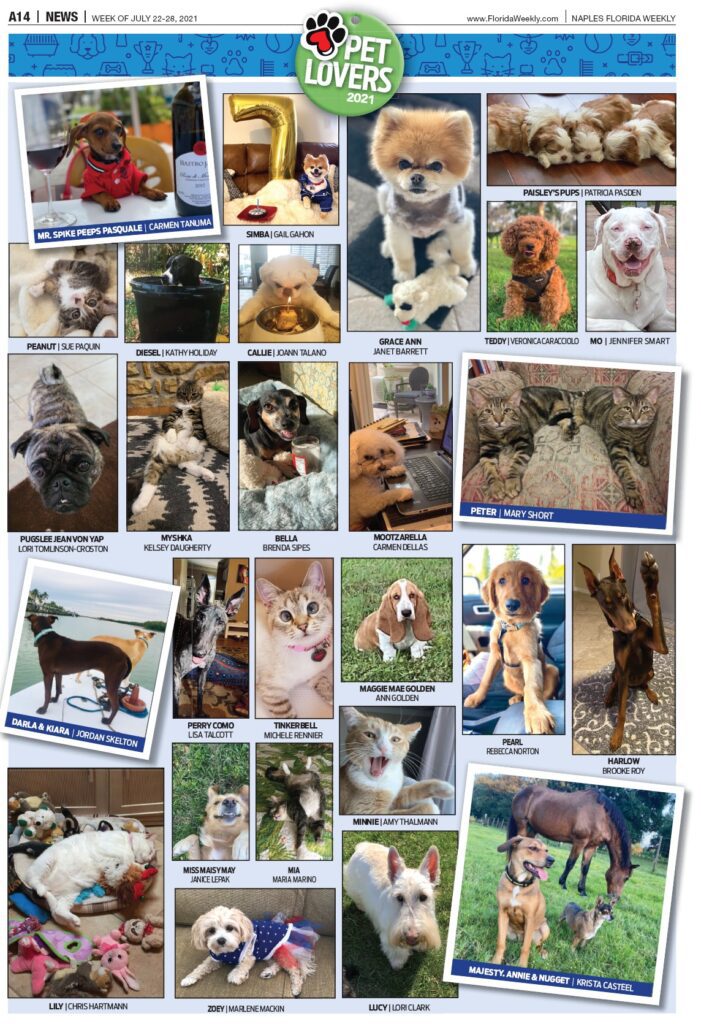 Merc is a 2½-year-old pug and Pinky a 9-year-old Chihuahua who just happens to have been born hairless. Both are alumni of Gulf Coast Humane Society, where Jessica has worked as the volunteer coordinator for nearly seven years.

Soon after Lola, the family pug of 14 years, died in February 2019, Merc came to GCHS as an owner surrender. “It felt like Lola had sent him,” Jessica says. Pinky arrived at the shelter as a rescue from a backyard breeder situation.

The couple’s other 11 dogs aree also mostly adoptees from GCHS, although “some have just found us one way or another,” Jessica says. At 6 pounds, Pinky is the smallest among them; two Great Danes at 120-plus pounds each are the biggest. “And we have everything in between,” she adds. “Luckily, they all get along great” — with each other and with the dogs who come to the Purdys for boarding. 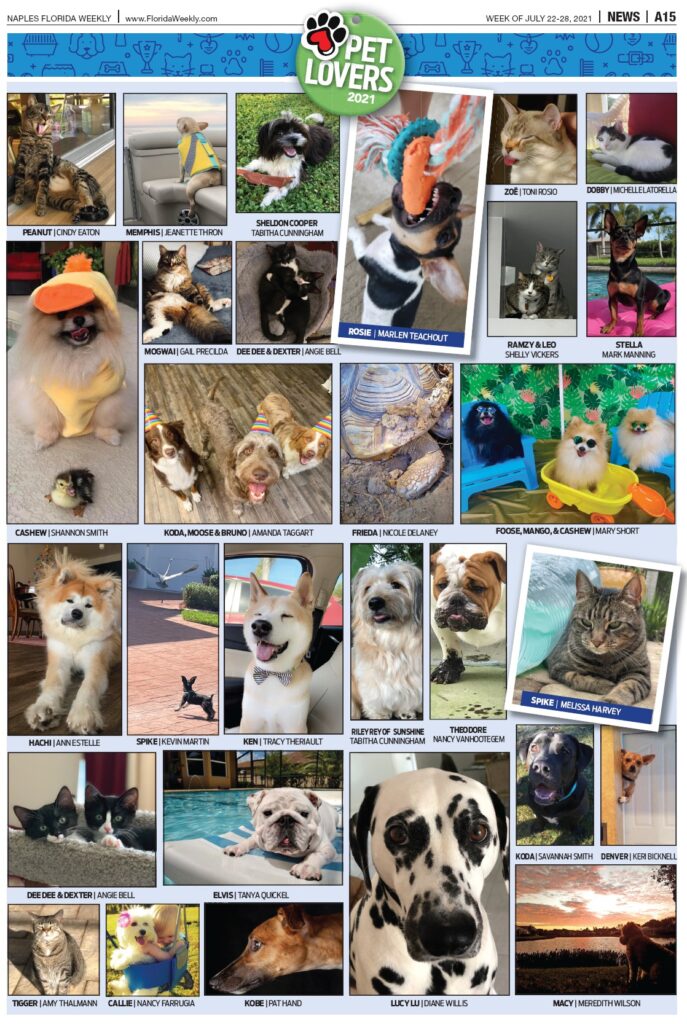 Merc recently became certified as a therapy dog and will soon start visiting senior living centersenters and hospitals with Jessica. “He makes friends with everyone,” she says.

Pinky “isn’t interested in strangers,” Jessica says. “She just wants to be the princess that she is.” Does she know any tricks? “Just how to climb a fence and then wait for me to come and get her.”

When their winning picture was taken, Merc and Pinky were camping with the Purdys in their vintage Shasta travel trailer at Koreshan State Park.

For their second-place prize the Purdys chose a $50 gift certificate to chewy.com. “We get four or five boxes from Chewy every three weeks,” Jessica says.

An affectionate and energetic 18-month-old shepherd mix, Lola was 10 weeks old when Michele Smith received her as a Valentine’s Day present from her son.

Favorite activities include playing fetch, swimming and boating. But Lola also loves accompanying Michele on the job for the family’s Quest Termite & Pest Services business. “She loves the car,” Michele says. Basically, Lola loves just about everything, she adds. “Her enthusiasm and energy are endless.” Michele chose a $50 Amazon gift card for her prize. ¦

News Reporter - July 25, 2021 0
Collaboration is key for Alair Homes, and for the first time in more than a year, building industry partners came together in person...