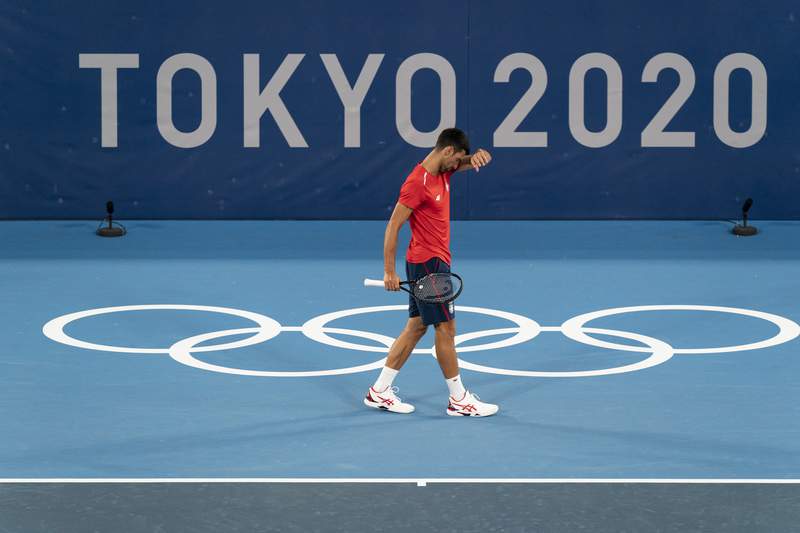 The Latest on the Tokyo Olympics, which are taking place under heavy restrictions after a year’s delay because of the coronavirus pandemic:

Home hope Naomi Osaka will face 52nd-ranked Zheng Saisai of China and Novak Djokovic will play 139th-ranked Hugo Dellien of Bolivia in the opening round of the Olympic tennis tournament in Tokyo.

Osaka is returning to competition after she withdrew from the French Open following the first round to take a mental health break.

Djokovic is attempting to become the first man to complete a Golden Slam by winning all four major tennis tournaments and an Olympic singles gold medal in the same year.

Russian swimmer Ilya Borodin, the European champion in the 400-meter individual medley, will miss the Tokyo Olympics after testing positive for the coronavirus.

The Russian Swimming Federation says Borodin tested positive at a training camp in the city of Vladivostok in the Russian Far East.

The positive test came shortly before he was expected to travel to Japan with other Russian swimmers.

Federation vice-president Viktor Avdienko tells the Tass state news agency that Borodin has been placed into isolation, the rest of the team has tested negative and no one was deemed a close contact in Borodin’s case.

Jill Biden has embarked on her first solo international trip as first lady, leading a U.S. delegation to the Olympic Games in Tokyo.

On her way she stopped in Alaska, where she praised efforts to vaccinate residents in the rugged, remote state but noted the work is not done.

She has a robust agenda for roughly 48 hours on the ground in Japan’s capital.

She is set to arrive in Tokyo Thursday afternoon and have dinner with Prime Minister Yoshihide Suga and his wife, Mariko Suga.

She will hold a virtual get-together with members of Team USA Friday before meeting Emperor Naruhito at the Imperial Palace. She attends the opening ceremony for the Games in the evening.

She also will host a U.S.-vs.-Mexico softball watch party at the U.S. Embassy for staff and their families, and cheer U.S. athletes competing in several events before leaving Tokyo.

Australia’s highest-ranking Olympic official and the current premier of the state of Queensland, where the 2032 Summer Games will be held, have put an early test to the old adage that sports and politics don’t mix.

Hours after Brisbane was given the hosting rights for the Games 11 years down the track following an International Olympic Committee vote in Tokyo on Wednesday, Australian Olympic Committee President John Coates had a public disagreement with Queensland state Premier Annastacia Palaszczuk.

The issue at the late night news conference in Tokyo? Whether Palaszczuk and other members of the city’s delegation should attend the Tokyo Olympics opening ceremony on Friday.

Palaszczuk indicated she’d be staying in her hotel room.

That didn’t sit well with Coates, a powerful vice-president for the IOC and one of the driving forces behind Brisbane having received the hosting rights so soon without any real competition.

Coates told Palaszczuk that she and the others could not stay home and sit in their rooms.

Copyright 2021 The Associated Press. All rights reserved. This material may not be published, broadcast, rewritten or redistributed without permission.

Share
Facebook
Twitter
Pinterest
WhatsApp
Previous articleGabe Davis, with a little help from his friends, gives away backpacks in Pine Hills
Next articleProposed bill could make it illegal to take cellphone video of police