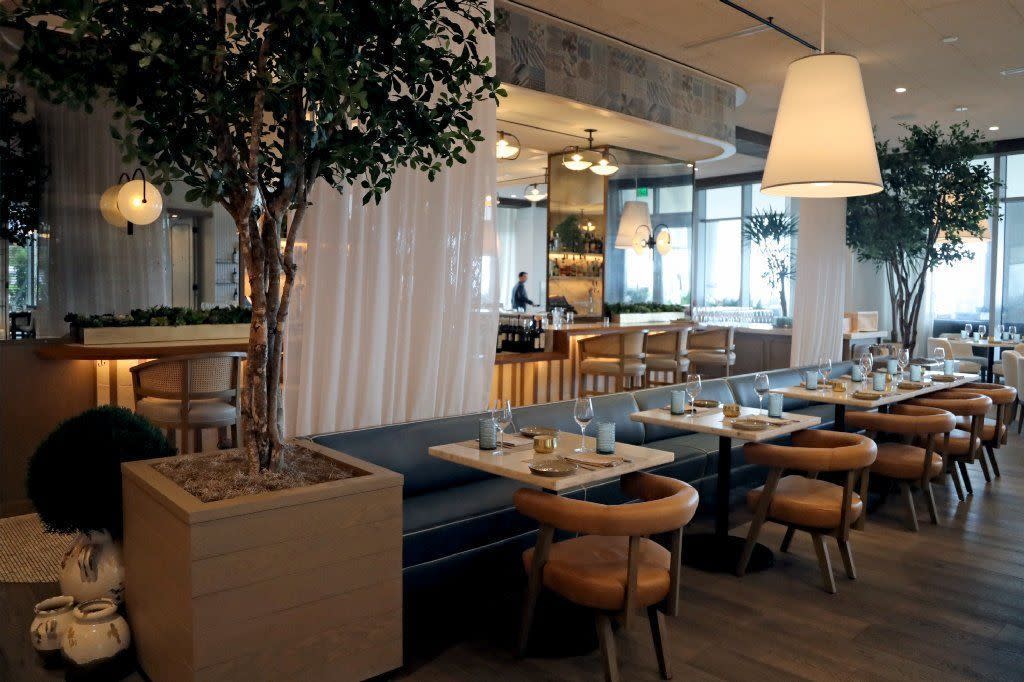 Got a tip for this weekly check on what’s happening in South Florida’s dining scene? Email Arlene Borenstein-Zuluaga at aborenstein@sunsentinel.com.

Stay up to date with the South Florida dining news:

Sign up for our twice-weekly Eat Beat newsletter, filled with restaurant news, guides and recipes. Go to SunSentinel.com/newsletters to sign up.

After a quick coat of paint and switching out a few photos, the high-end Italian restaurant’s second location is now open in the former home of Nick’s Italian Restaurant on the Galt Ocean Mile. The original Vico on North Federal Highway remains open. 3496 N. Ocean Blvd., cafevicorestaurant.com

From Damn Good Hospitality CEO Jeff John, Warren is an “American bistro with a world flair,” under the direction of Chef Jen Knox. But whiskey may be the star, with more than 1,000 bottles of hard-to-find scotch and bourbon. 15084 Lyons Road, Delray Beach; WarrenDelray.com

This bistro and deli from first-time restaurateur Paul Hugo has opened in the former location of Brown Dog Eatery with a menu of deli sandwiches and smoked meats, as well as bistro fare like seafood pasta, steak Diane and shrimp and grits. 2701 E. Oakland Park Blvd.; 954-669-1000, kraftbistrodeli.com/

If not by name, you might recognize this Cuban eatery because of the large rooster statue placed outside its Pompano Beach and Deerfield Beach locations. Now, there’s one more spot to grab their Cuban sandwiches, empanadas (beef, chicken or ham and cheese), and Latin pastries. 204 S Powerline Road; miyilacubanita.com/

The 10-seat sushi bar at Sushi By Bou Beach Club, an omakase-style restaurant from sushi master David Bouhadana, is now open at the the Marriott Residence Inn Pompano Beach. The rest of the 80-seat restaurant will open sometime in June. Other locations in New York, New Jersey, Chicago and Miami Beach, but this one will have a beachy vibe. 1350 Ocean Blvd.; sushibybou.com

A new daiquiri bar in The Set neighborhood aims to revive West Atlantic Avenue, just east of I-95. The eatery opened in March and serves $2 tacos, $5 margaritas and colorful daiquiris in four flavors. There are also midnight brunches on Friday and Saturday nights. 404 W Atlantic Ave.; @studio404delray

Kosher Mediterranean dishes including falafel, shawarma and gyros with a full bar, from the owners of Pita Express on Stirling Road. 3558 N. Ocean Blvd., pxgrill.com, 954-280-0050.

The fiesta continues to West Palm Beach where the popular Mexican location will open its third location at Rosemary Square later this year. The 6,500 square foot restaurant will offer indoor and outdoor seating along with Mexican beers and handcrafted margaritas. The food is described as “Mexican soul food.” Other locations are in Fort Lauderdale and Delray Beach. 700 S Rosemary Ave.; elcaminowestpalmbeach.com

When it opens to the public on June 14 at the Waterstone Resort & Marina, SeaSpray Inlet Grill will be the only dock-and-dine waterfront restaurant in Boca Raton that isn’t a private club. The menu promises fresh seafood and Florida fare. 999 E. Camino Real, 561-368-9500, SeaSprayBoca.com or WaterstoneBoca.com.

The Oakland Park Boulevard craft beer bar will move to a new, expanded home the first week of July in warehouses on North Dixie Highway. One building will house a craft-beer taproom and kitchen, and a 2,000-square-foot beer garden behind the warehouses will connect to Fat Tap’s brewhouse, a nanobrewery whose one-barrel system can pump out 31 gallons of suds per batch. 3553-3555 N. Dixie Highway, FatTapBeerBar.com.

This all-you-can-eat Brazilian eatery replaces the former Burgers & Suds location on McNab Road. Gauchos (carvers) will serve cuts of beef, pork, chicken, lamb and Brazilian sausage straight from the grill. There will also be a buffet of salads and hot items to accompany. 360 E. Mcnab Road; 954-889-4669, rgssteakhouse.com

This drag-themed restaurant known for over-the-top hamburgers, hand-cut fries and queens who perform and mingle with the crowd, will debut in June on Wilton Drive, replacing the space formerly occupied by Rumors Bar & Grill. 2426 Wilton Drive; HamburgerMarys.com

After changing ownership twice since the pandemic began, Andrews Diner has moved off Andrews Avenue and onto Cypress Creek Road, where it will replace the former Duffy’s Diner when it reopens in June. The longtime Greek greasy spoon is best known for dishing gyro omelets and spinach pie, and for appearing on Food Network’s “American Diner Revival” in 2016. 925 NE 62nd St.

Restaurateur Memphis Garrett will turn his fast-casual Poke House into a ghost kitchen and convert the space into a No Man’s Land, a cocktail parlor and lounge. Opening in June, the lounge will offer a 10-item menu of small shareable plate dishes. 666 Federal Highway. NoMansLandFTL.com.

An Italian mother’s cooking is the inspiration behind the eatery expected to expand to a total of six locations between Palm Beach and Broward counties by the end of the year. The Abbenante family’s brand of traditional Italian recipes over the past 35 years includes dishes such as tagliolini alla carbonara, linguine alle vongole and cannelloni al forno. The Boca Raton and Fort Lauderdale locations are expected to open by year’s end. 2364 N. Federal Hwy, Fort Lauderdale; Uptown Boca plaza, 9560 Glades Rd., Suite 180; Lynoras.com

Italian for “prohibition,” Divieto aims to takes diners back to the roaring ’20s in a new 5,907 square foot space expected to open at the end of the year. This is the restaurant’s fourth Florida location serving scratch-made Italian dishes, thin crust pizzas and era-inspired cocktails. 2729 N. University Drive; divietoristorante.com

The oceanfront taco eatery under a tiki hut on the Broadwalk closed June 1. The restaurant made the closure official on Instagram (@thetacospothollywood) by posting, ”This journey was incredible and we are so proud of what we were able to accomplish.” 1500 N Broadwalk

It’s a Cubano B, Pompano Beach

Rob Menendez’s family operated restaurant will close after June 12, he announced in a Facebook post. The small shop started as a food truck specialized in Cuban sandwiches and its Frita Burger topped with potato straws. 3350 NW 22nd Terrace #400b; 754-222-8711, cubanob.com

Since 1974 Nick’s has been the source of old-school Italian cuisine on the Galt Ocean Mile. Over the decades Nick’s hosted the likes of Adam Sandler, Frank Sinatra Jr. and Robert DeNiro. Last day of service was May 31, but on June 4 a second location of Fort Lauderdale favorite Cafe Vico reopened the doors. 3496 North Ocean Blvd.; nicksitalianonline.com

Since 1947 this waterfront dining destination inside Cozy Cove marina offered boaters, locals and tourists an at-home vibe with coastal fare. Extreme staffing shortages however closed the restaurant, according to an announcement on their Facebook page. The post also said they will be consolidating the team with their sister restaurant, Historic Downtowners in Fort Lauderdale, though they hope to reopen the Dania Beach location if they can secure the right staffing. 318 N Federal Highway; 954-925-5962, historicdockers.com

Endless servings of meat at this Brazilian steakhouse have come to an end. The location across from the Galleria Mall has permanently closed. 2457 E Sunrise Blvd., texasdebrazil.com

After six years, the kitchen and bar closed May 23 “due to the unfortunate inability to reach an agreement with landlords,” according to a statement from Damn Good Hospitality. 522 Lucerne Ave.