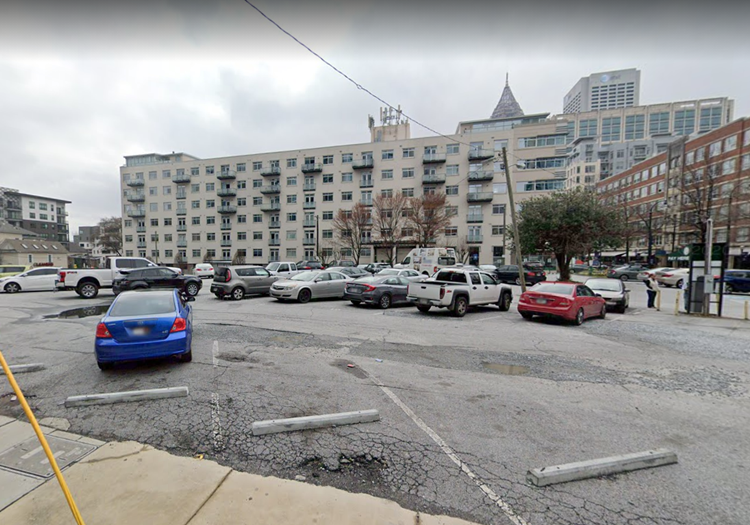 A luxury commercial developer out of New York is entering the Atlanta market with plans for a 33-story mixed-use tower in Midtown.

The parking lot at 811 Peachtree St. in Midtown Atlanta, where Property Markets Group is proposing to develop a mixed-use tower.

Property Markets Group is proposing a 460-unit, 330K SF residential skyscraper that would include 16K SF of retail and 76.5K SF of office at 811 Peachtree St., according to the Midtown Development Review Committee agenda posted Friday by the Midtown Alliance. PMG also will develop a six-story, 455-space parking deck fronting Sixth Street, according to the application.

Integral Group previously planned to develop the 32-story Eviva on Peachtree project, but it appeared to have abandoned those plans in 2018, according to WhatNowAtlanta.

A spokesperson for PMG declined to comment on the project.

This would be PMG’s first project in Atlanta. Over the past 30 years, PMG has developed, purchased, financed and marketed 85 residential buildings and more than 150 real estate projects, according to its website. Those projects include the 22-story Walker Tower and Stella Tower, both in New York City, Echo Brickell, X Miami and Muse Sunny Isles in Miami.

PMG is in development with more than 5M SF in New York and South Florida, including the 1,428-foot supertall 111 West 57th St. condominium tower, which broke ground in 2014 but has encountered struggles since then, including fending off foreclosure proceedings. As of February, PMG pre-sold 15% of the 60 units at 111 West 57 St., including a penthouse under contract for more than $50M and two other units at $30M each.

It was unclear as of press time if PMG was building for-sale or for-rent residential units at the project.

PMG is one of two developers proposing to add skyscrapers to the Midtown Atlanta skyscraper during Tuesday’s development review committee meeting. Mill Creek Residential, one of the most prolific urban multifamily developers in Metro Atlanta, is proposing a 30-story, 407K SF tower at 180 10th St., between Juniper Street and Piedmont Avenue, that would include 345 residential units and 4K SF of retail space. Mill Creek also would develop an eight-story podium parking deck, partially underground, below the structure.

Mill Creek operates eight properties in Metro Atlanta, all under its Modera brand, including Modera Buckhead, Modera Midtown — a half-mile west of its 10th Street site — and Modera Sandy Springs.