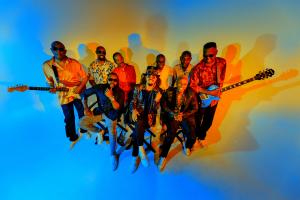 Best known for a series of early-2000s smash hits such as ‘Who Let the Dogs Out’, ‘Move It Like This’, and ‘Best Years of Our Lives’ among many others, ‘Fire’ marks the groups first collaboration with Latin hitmaker Maffio. The pounding rhythm, relentless as it is sexy, continues to prove the bands’ ability to remain at the forefront of the ever-evolving dance scene. Released on May 6th, the single is also featured on Maffio’s new, highly-acclaimed record, Eso Es Mental.

The music video, shot in both Miami, FL and the Bahamas, features Maffio and is directed by longtime collaborator of the Baha Men, Charlie Bahama. The release of ‘Fire’ also precedes a ten-city tour of the US including shows at Disney’s Epcot during their annual Food & Wine festival, the Brooklyn Bowl in Philadelphia, and City Winery in New York City.

To schedule an interview, feature, or to request more information, contact Dominick Sotis at [email protected]


EIN Presswire’s priority is source transparency. We do not allow opaque clients, and our editors try to be careful about weeding out false and misleading content.
As a user, if you see something we have missed, please do bring it to our attention. Your help is welcome. EIN Presswire, Everyone’s Internet News Presswire™,
tries to define some of the boundaries that are reasonable in today’s world. Please see our
Editorial Guidelines
for more information.