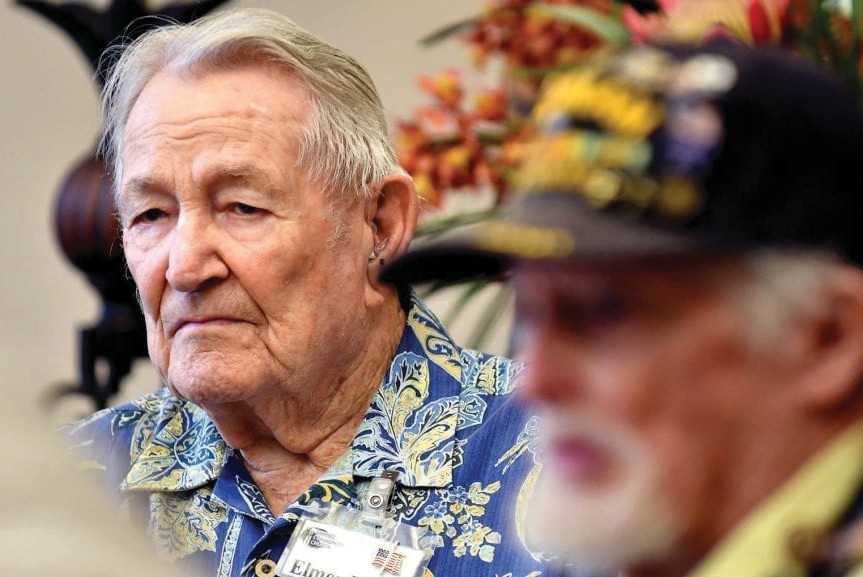 Elmer Blair, who was featured in a 2019 Florida Weekly tribute to veterans, wrote in a letter seeking the medal promised him that “I am a very proud retired Army officer.” CHRIS TILLEY / FLORIDA WEEKLY FILE PHOTO

Elmer Blair, 102, received his Bronze Star medal nearly eight decades after he led his army platoon safely away from an attack by a German tank during the Arno Line Italian campaign.

“I guess I never realized how much it meant to me,” Mr. Blair said.

His 1944 act of bravery in battle had consequences for Mr. Blair. His right leg was seriously injured in the confrontation that followed, and later — after thwarting that German tank attack — he had to be carried away for medical care. The injury ended his World War II com- bat infantry days, but not his 38-year military/civilian career.

Seventy-seven years later, the memory of World War II returned for Mr. Blair in February when he opened his mail and saw his Bronze Star.

The medal recognizes his actions: in combat he led with exceptional valor and saved the life of every single member of his platoon.

His quest for acknowledgement of his act of bravery began about two years ago.

With the help of his daughter, Debby Donahue of Captiva Island, and then Francis Rooney, U.S. Representative for Florida’s 19th congressional district at the time, Mr. Blair sought to receive the medal promised to him. 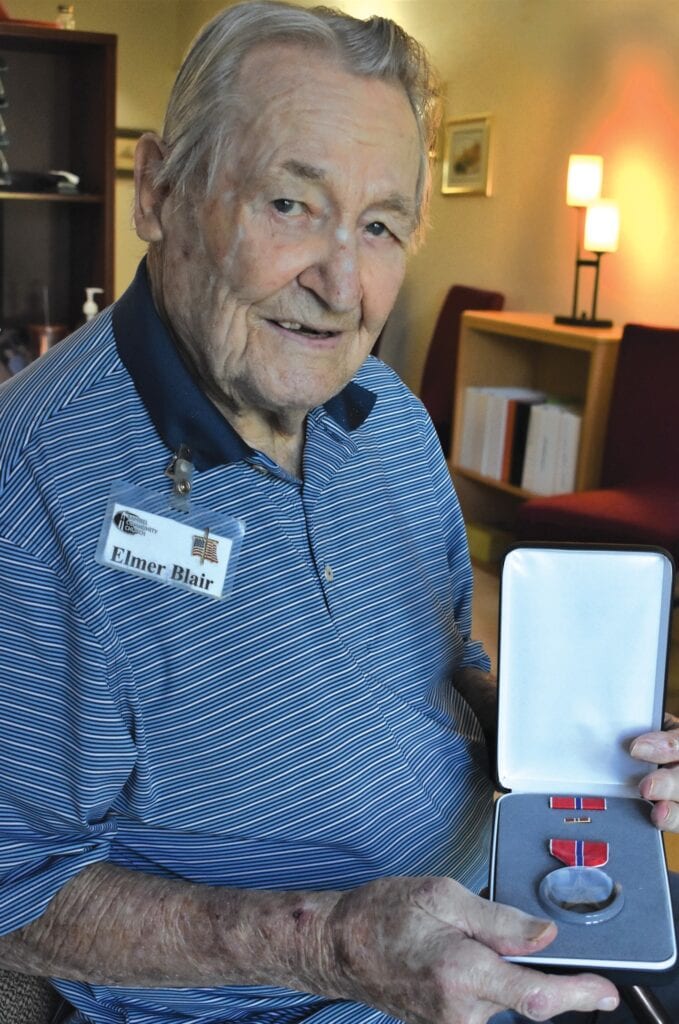 Elmer Blair, 102, was awarded the Bronze Star for leading his platoon while fending off a hard-charging German tank in a 1944 battle in Italy. COURTESY PHOTO / CYPRESS COVE

Gaining the attention and recognition proved a laborious effort, explained Ms. Donahue, who helped her father in collecting all needed service records and discharge papers. Their efforts were not without frustration and disappointment, leading at one time for Mr. Blair to say that he didn’t care if he ever received the medal.

He spoke about the military’s omission to many of his friends living at Cypress Cove, the South Fort Myers continuing care retirement community he calls home.

Mr. Blair, an active resident of Cypress Cove, said the urging of friends, family and others made him proceed with his quest.

“I am a very proud retired Army officer,” he stated in his letter seeking his long-awaited Bronze Star. “I was told at one time I would be awarded a Bronze Star for actions during combat, but it never happened.”

His never-give-up attitude most likely sprouted from his upbringing in the coal mining regions of West Virginia. There, at a young age, he joined his father working in the mine. The work would be excellent training for his military combat. He vividly remembers his first terrifying coal car ride into the mine, pressed low into a coal car. The shaft was so narrow and low, that “you had to lay flat beneath the coal car’s rim.”

It was tough, difficult confining work — one that his father did for 61 years.

But soon Mr. Blair was called to duty in World War II. As a young infantry soldier, he moved up the ranks quickly. He was re-assigned to a position in northern Europe with the Army’s Transportation Corps after recovering from his tank attack injuries. When the war ended, Mr. Blair returned home with no intentions of re-enlisting. But the Army had other ideas and offered an incentive package for him to remain with the Transportation Corps.

He obliged and for the next 16 years (he was now married), he and family would call nine different locations in the U.S., Canada, Europe and Asia home before retirement. Using the GI Bill to help fund his college education for a degree in health and physical education, opportunity for another “military” position came knocking. Mr. Blair became the first civilian athletic director of the 101st Airborne Division at Fort Campbell, Ky., a position he held for 10 years.

He would add another 12 years, and eight moves, serving in Asia and Europe in recreation management. For a time, he served as recreation director for all European military installations. ¦