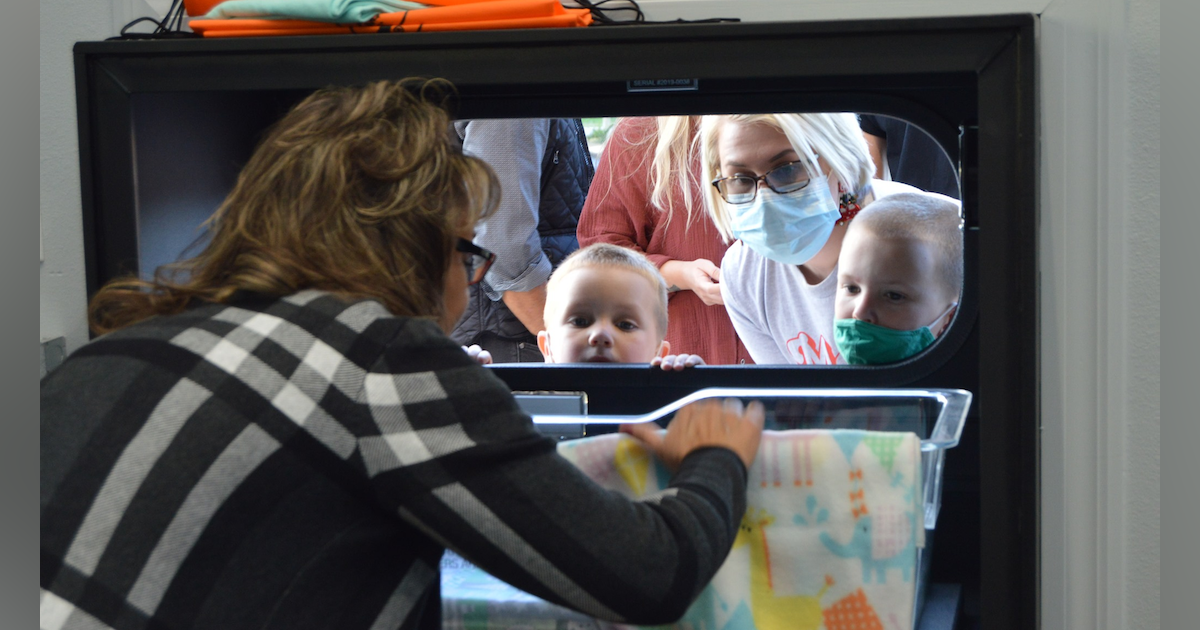 The state’s first Safe Haven Baby Box was unveiled in front scores of residents, law enforcement and fire officials, as well as politicians and well-wishers at the southeast corner of the newly built fire and police building in Ocala.

The occasion, attended by Monica Kelsey, founder and CEO of the Safe Haven Baby Box and Linda Znachko, founder of He Knows Your Name, was to let people know that a parent can leave a child in a safe environment.

According to a Safe Haven Baby Boxes information pamphlet, it’s the first safe baby box in Florida, and the 53rd for the United States. The first baby box was made available to the public in Woodburn, Indiana, in April 2016.

The baby box cost approximately $15,000 to install. The box has an alarm system that immediately notifies anyone in the building once a baby is dropped off. The boxes have heating and cooling features, and once the lid is closed, it locks the child inside.

Addressing the audience, Kelsey said the issue is near and dear to her heart because she’s a survivor of rape, and was abandoned. That’s why she said she wants to make sure that babies left alone are safe once they’re left behind.

Within the last four years, more than 20 children have been reported abandoned in Florida, according to the Safe Haven Bay Boxes brochure.

Locally, there has been two instances within the last 11 years where infants were left alone.

In 2009, Ocala police officers received a call about a baby girl inside a QVC box that was on the side of a roadway. Doctors, examining the ant-bitten, hungry infant, estimated the child’s age to be anywhere from 3 to 7 days old. Treated at a local hospital, the child was later turned over to the Department of Children and Families.

Then, two days before Christmas in 2017, a newborn baby boy was found inside a bathroom at a rest stop on Interstate 75. The child was discovered by a woman on the changing room table in the women’s restroom. DCF took custody of the child, Marion County Sheriff’s Office officials said.

Nationwide, Safe Haven Bay Boxes officials said 10 babies were left in their boxes. At least six of those cases occurred in 2020.

State law allows parents to leave their unharmed babies who are not more than one week old with an employee at any hospital, emergency medical services station or with a firefighter at any fire station in Florida.

City Councilman Ire Bethea, whose district houses the police/fire building, called the baby box “a victory for Ocala,” and an outlet for any mother who feels she doesn’t have an options.

Mayor Kent Guinn, who said he was adopted, said that when he learned about the idea of having a baby box in the community, he did not hesitate for it to be built in the city.

State Sen. Dennis Baxley, who has adopted two children, and whose district includes parts off Marion and Lake counties and all of Sumter County, praises the baby box, saying it will make a difference.

State Rep. Mike Beltran, whose district includes parts of Hillsborough County, said he sponsored a bill that attracted both Democrats and Republicans to have baby boxes throughout the state. Beltran, a Republican, said it was never adopted by the Senate.

The footprint featured inside the baby box honors Bay Amelia, who was left abandoned at Eagle Creek Park in Indiana in December 2014, according to Safe Haven Baby Boxes information. Baby Amelia was the last deceased child found abandoned in Indiana.

Znachko credits that achievement to awareness, and hopes the message will touch everyone in Florida and elsewhere.