On April 7, 2021, at approximately 5:50am, 8 District – Grimsby uniform officers responded to a report of a robbery in Grimsby.

Officers attended to a home in the area of Samuel Road and Bal Harbour Drive in Grimsby.  The initial investigation by officers determined that a male victim had been warming his 1999 black and gold Chevrolet Silverado pickup truck (Ontario # 6044ZT) in his driveway.   A male suspect approached the victim and brandished a weapon.  The suspect demanded the truck keys and the victim’s wallet.  The suspect obtained both and drove from the area in the victim’s Silverado.

The suspect is described as:

The victim was not injured.

The location of the stolen truck is unknown.  Should a member of the public see the truck they are being asked to contact the police.

The incident has been assigned to detectives from the 8 District detective office.    Anyone with information about this incident is asked to contact detectives at 905-688-4111, extension 1009336 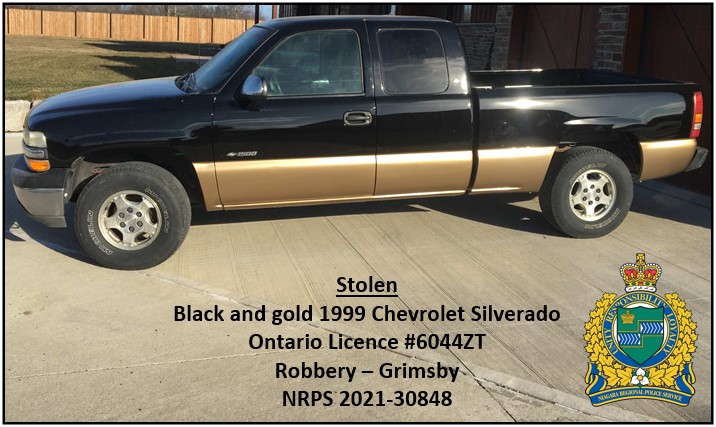