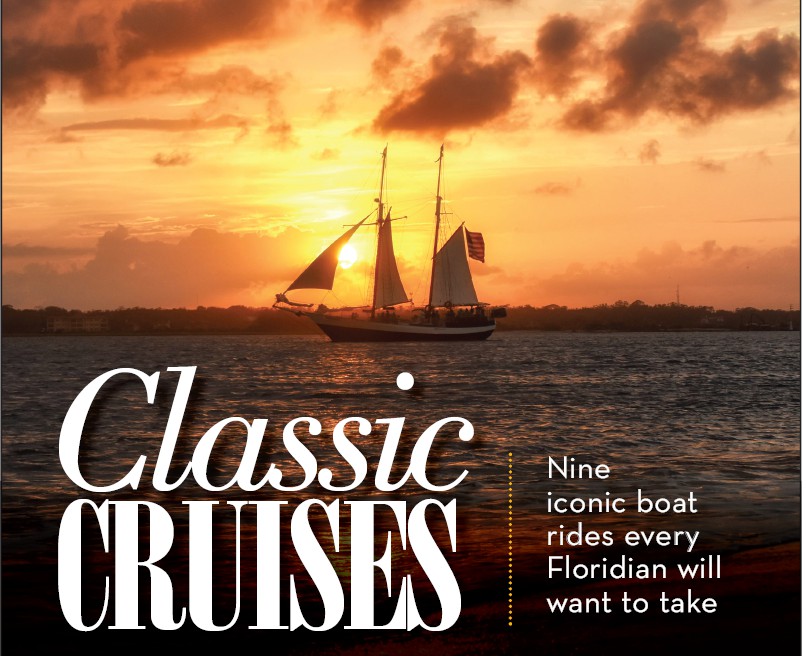 Schooner Freedom, built in Virginia in 1982 and brought to St. Augustine in 2001, is a double-masted, 76-foot replica of the blockade runners of the 19th century.

NEXT TIME YOU THINK ABOUT “GETTING out and about” consider “getting out on a boat.” A tour boat, that is! Typically, more diminutive than the giant cruise ships departing from the ports of Miami in Fort Lauderdale, Tampa, Palm Beach or Jacksonville, these vessels offer trips of much shorter durations, often just few hours, but provide a vantage point you won’t have on a walking, hiking, biking or car tour.

You won’t need to search hard to find an off-land tour; there are many throughout the Sunshine State. But to launch your effort, we’ve rounded up nine iconic boat rides we think you’ll enjoy as much as we did. Options range from dinner cruises showcasing homes and yachts of the rich and famous in Fort Lauderdale or Naples, to scenic rides through Winter Park’s lakes and canals, to airboat tours of the Everglades where alligator sightings are common, or nature tours where bottlenose dolphins ham it up beside the ship. And that’s just the beginning. Check these out online, make a reservation and then go out and make some waves. 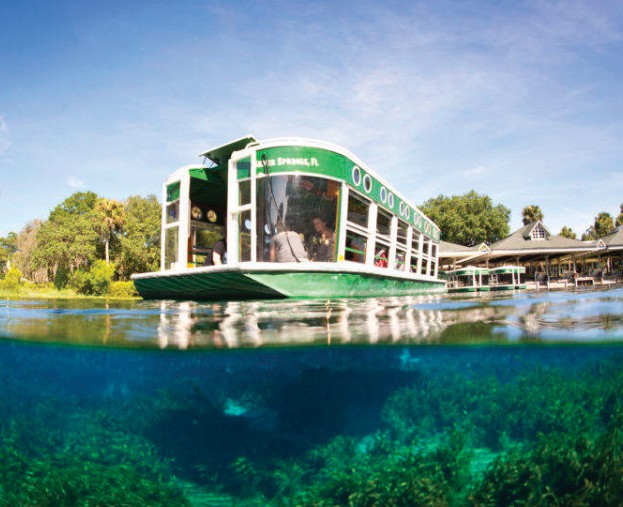 One of Florida’s first tourist attractions

Glass Bottom Boats, Silver Springs State Park. Glass bottom boats date back to the late 1800s and launched at Silver Springs, just east of Ocala. One of Florida’s first tourist attractions, the fleet of electric propelled boats are equipped with large glass windows at the bottom of the vessel, allowing guests a clear view of some of the 32 species of fish, manatees, turtles and vegetation. Above water, visitors can see an assortment of wildlife, ranging from alligators to rhesus macaque monkeys, all kinds of birds, and a dugout canoe dating back to the 1500s, a relic of the area’s Native American settlers.

Silver Springs is one of the largest artesian springs ever discovered and has been a hotspot for filmmakers over the years. Six of the original “Tarzan” movies starring Johnny Weissmuller were made at Silver Springs, as were more than 100 episodes of “Sea Hunt” with Lloyd Bridges. Info: 352-261-5840 or www.silversprings.com/glass-bottom boats/. 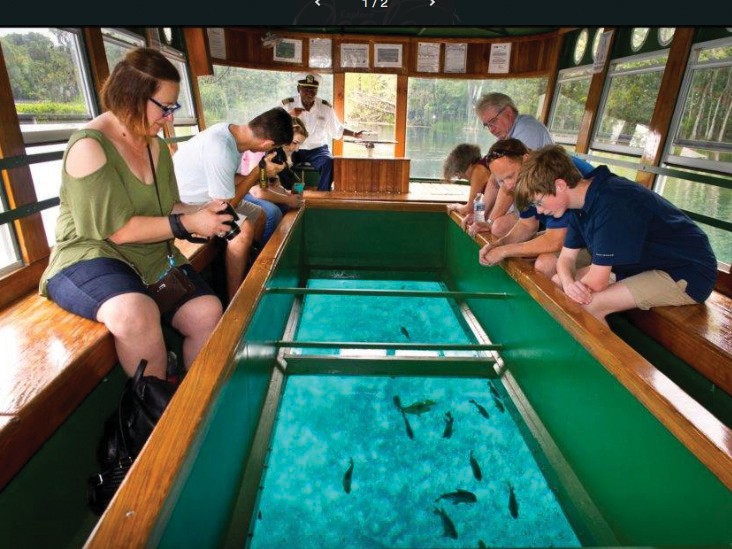 At Silver Springs, near Ocala, cruisers can view fish and other sea creatures from aboard a glass-bottom boat. Silver Springs is one of the largest artesian springs ever discovered.

The Jungle Queen, Fort Lauderdale. Since its inception in 1935, the historic riverboat franchise has given more than 20 million guests “amazing experiences both night and day,” according to the sightseeing cruise’s Facebook page. Guests, who are encouraged to have their photographs taken as the board, have first-rate views of frolicking dolphins, spectacular mansions, magnificent megayachts and the picturesque Fort Lauderdale skyline as they sail through the New River. In addition to daytime 90-minute sightseeing sails, an evening Tropical Isle dinner and show cruise is offered and includes an all-you-can-eat barbecue dinner and live entertainment on a small island. Cruises set sail from the Bahia Mar Yachting Center on A1A. Info: 954-462-5596 or www.junglequeen.com. 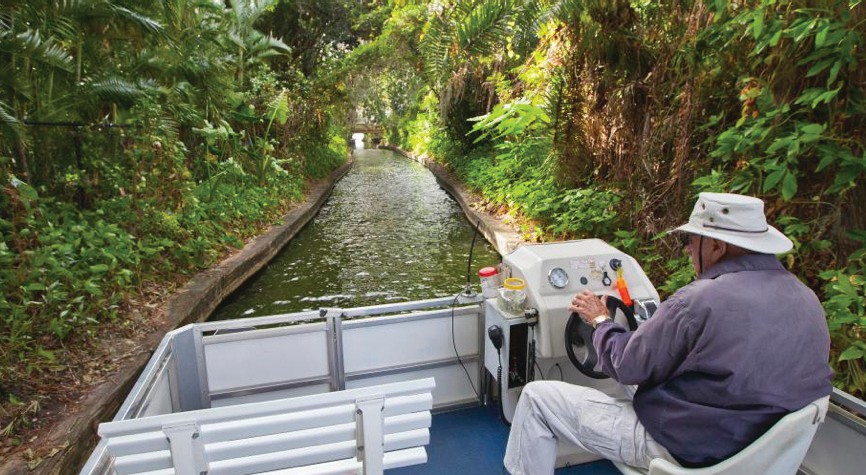 Scenic Boat Tours has offered excursions along the lakes and canals of Winter Park since 1938.

Scenic Boat Tours, Winter Park. One of Central Florida’s oldest communities dating back to the 1800s, Winter Park also is home to one of the Sunshine State’s oldest attractions, the Winter Park Scenic Boat Tour. The tours have been taking visitors through the lakes and canals of this city since 1938. The hourlong excursions on openair pontoon boats cruise beneath mossy trees, past lily pads, wading birds and maybe an alligator or two. The captain will teach you about local history and point out the old-money mansions of Lake Osceola and the new megamansions of Lake Maitland. You’ll learn about some of the famous folks who visited here, such as Margaret Mitchell, who wrote “Gone with the Wind,” and Fred Rogers, aka Mr. Rogers of “Mr. Rogers’ Neighborhood” and a graduate of Rollins College. Info: 407-644-4056 or www.scenicboattours.com. 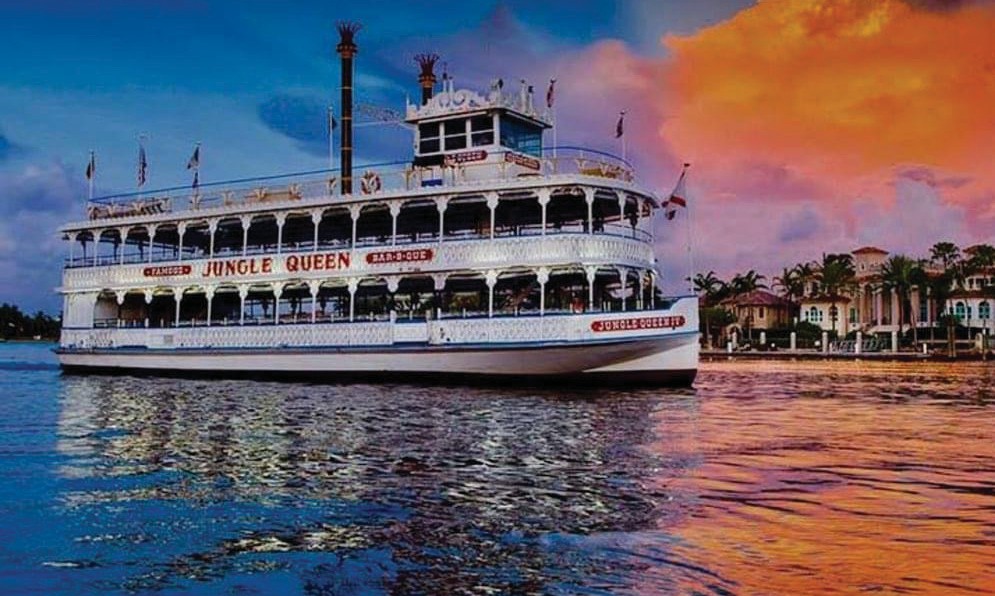 The Jungle Queen has plied the waters around Fort Lauderdale since 1935. COURTESY PHOTOS

Schooner Freedom, St. Augustine. Built in Virginia in 1982 and brought to St. Augustine in 2001, the Schooner Freedom is a double-masted, 76-foot replica of the blockade runners of the 19th century. With almost 2,400 square feet of sail, the tall ship serves as a worthy testament to naval history. Aboard, visitors will hear about the unique history of the country’s schooners — and of St. Augustine, founded in the 16th century. With no set sail path, the ship goes wherever the wind takes it, but during the day, passengers, who are encouraged to bring binoculars or borrow a pair onboard, are likely to see birds and marine life such as dolphins, manatees and turtles. Cruises are two hours long and depart from the city marina. Info: 904-810-1010 or www.schoonerfreedom.com. 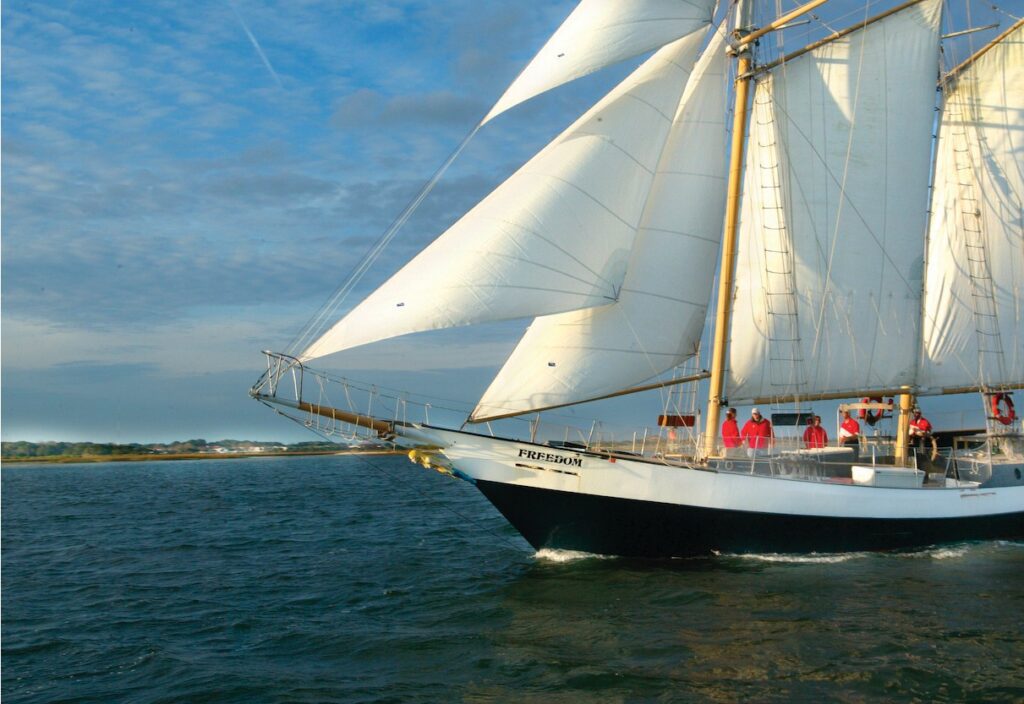 With nearly 2,400 square feet of sail, Schooner Freedom is an honorable testament to naval history and to the blockade runners of the early 1800s. COURTESY OF ST. AUGUSTINE, PONTE VEDRA & THE BEACHES VISITORS AND CONVENTION BUREAU

Diva Duck, West Palm Beach. This strange looking amphibious vehicle gets second glances from those who see it traveling down the street. It looks like a swamp buggy on steroids. In the water at night, it’s been mistaken for the Loch Ness Monster. But Diva Duck is neither. It’s both a boat and a truck/bus. Tours, which last 75 minutes, begin at the Palm Beach Outlets and travel through part of Palm Beach. Diva Duck enters the water (the Intracoastal Waterway) at Currie Park. Riders will learn local history, see multimillion-dollar Palm Beach estates and other hotspots such as the Society of the Four Arts, Bethesda-by-the- Sea, the Flagler Museum and Rybovich Marina. Riders are encouraged to make quacking noises as they go and should be prepared for an onslaught of puns from the tour guides. Info: 561-844- 4188 or www.divaduck.com. 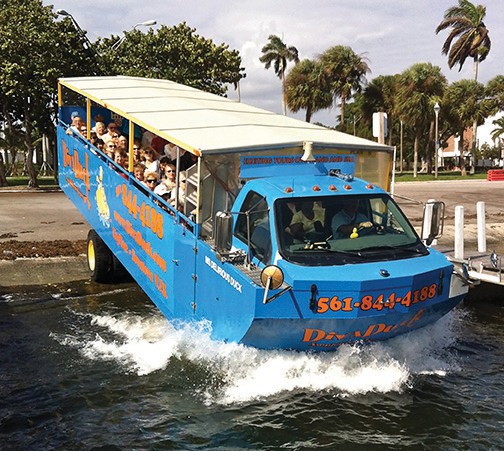 The amphibious Diva Duck will take you on a tour of Palm Beach and surrounding environs by land and by water.

A ride on the wild side

Loxahatchee Everglades Airboat Tours, Parkland. Airboat rides have been around since the mid-1930s and have been a popular attraction in the Everglades ever since. If you’ve never been out to the ’Glades, you have quite an adventure ahead. The Everglades is constantly changing, so even if you have been out before, you’ll want to see it again. You may see alligators, various birds, turtles, native and exotic plant species, fish and sometimes frogs and snakes. The 50-minute tours cover five or six miles. Beware: Airboats are noisy — but hearing protection is provided. Reservations necessary. Info: 561-901- 0661 or www.evergladesairboattours.com or www.letsairboat.com.

Naples Princess, Naples. Known for fine food, fabulous views and topnotch service, the Naples Princess has been a premier attraction in this Southwest Florida city since 1991. Visitors who board the 105-foot air-conditioned luxury yacht will enjoy majestic views of Naples Bay, see the multimillion-dollar homes of historic Port Royal and could encounter a few playful dolphins swimming alongside the 149-passenger ship. Sightseeing, lunch, hors d’oeuvres and sunset dinner cruises are available. Weather permitting, the Princess will take you to the Gulf of Mexico. The yacht sails from the Port O Call Marina. Info: 239-649-2275 or www.naplesprincesscruises.com. 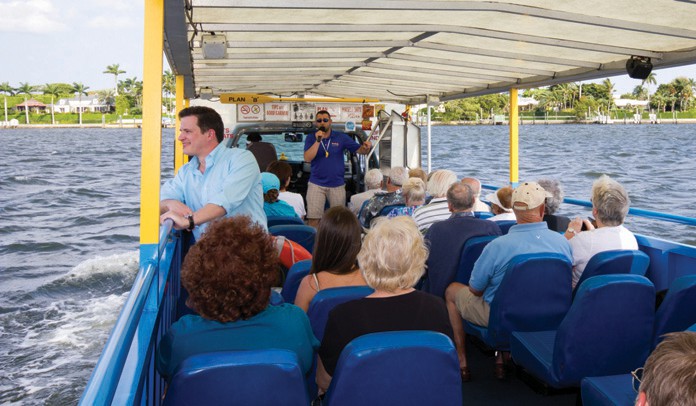 COURTESY OF DISCOVER THE PALM BEACHES

A steamboat with cinematic history

African Queen, Key Largo. How would you like to sit where Katharine Hepburn and Humphrey Bogart spent a lot of time on a steamboat they used in the filming of “The African Queen” in 1951? You can do just that in Key Largo, where the meticulously restored African Queen is docked and available for 90-minute canal tours. Licensed to take just six passengers at a time, the celebrity vessel is registered as a national historic site. Tours depart from Marina del Mar, part of the Holiday Inn complex, at Mile Marker 100. If you’re lucky, the captain may let you take a turn at the helm as you cruise along the Port Largo Canals to the ocean and back. Info: 305-451-8080 or www.africanqueenflkeys.com. 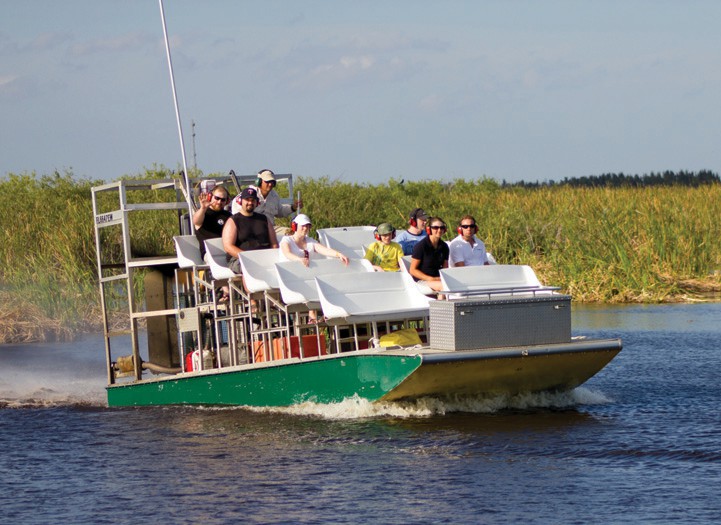 Loxahatchee Everglades Airboat Tours offer an opportunity to see the Florida Everglades up close. COURTESY OF DISCOVER THE PALM BEACHES

Lady Chadwick, Captiva Island. Captiva Cruises has been around since 1986 and has a fleet of four, including three catamarans and the Lady Chadwick, a two-story, 65-foot-long boat that docks at McCarthy’s Marina or South Seas Island Resort’s marina. U.S. Coast Guard-certified captains know the local waterways like the back of their hand and share their knowledge (and humorous anecdotes) about local history, wildlife and weather. They take passengers to surrounding islands (Cabbage Key, Useppa, Gasparilla and Pine Island) and offer sunset and sailing cruises, as well as a popular dolphin and wildlife cruise. Another destination: Cayo Costa State Park, a perfect spot for shelling. Info: 239-472- 5300 or www.captivacruises.com. ¦

You saw Katharine Hepburn and Humphrey Bogart in “The African Queen.” The vessel they used in the film is available for cruises in Key Largo. COURTESY OF FLORIDA KEYS & KEY WEST 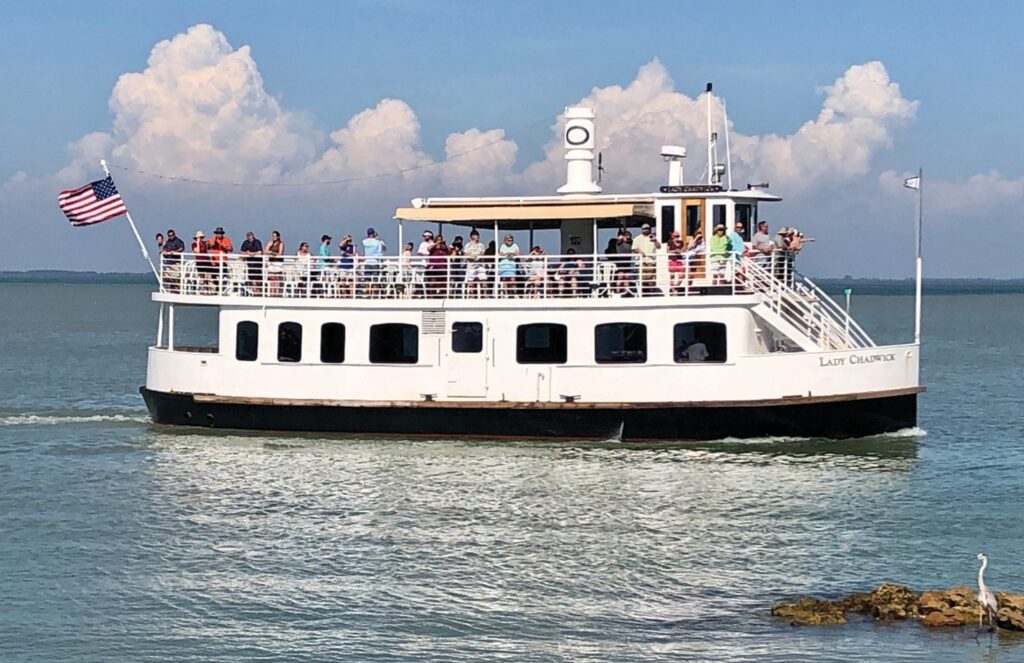 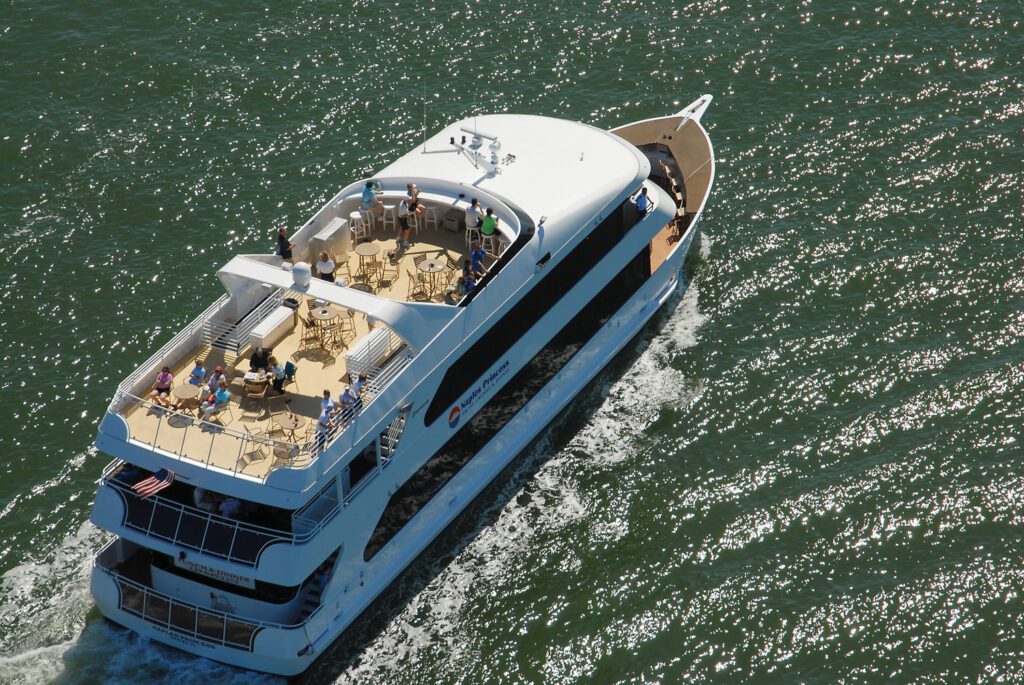