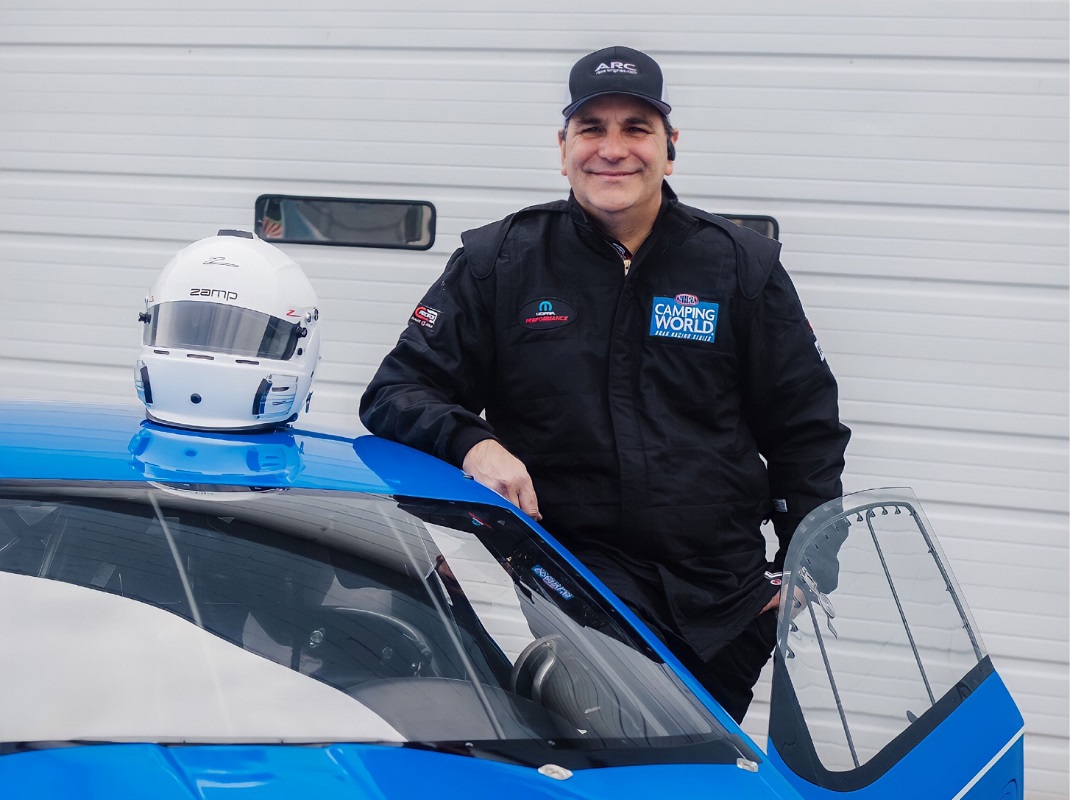 FRISCO, Texas – Mike Callahan will see a dream come to fruition when he begins his quest to earn his Pro Stock license during the CTECH World Doorslammer Nationals presented by JEGS, March 5-7 at Orlando Speed World Dragway.

The Frisco, Texas, business owner will compete in the event and then make his NHRA debut at the 52nd annual Amalie Motor Oil NHRA Gatornationals the next weekend in Gainesville, Fla., racing as part of a two car team with Pro Stock veteran Alan Prusiensky.

The pair will be racing eCarMover Dodge Darts, with Callahan also receiving support from Artisan Coffee.

For Callahan this is a dream come true that began through a mutual business relationship with Ron Capossela, the founder of Artisan Coffee, and some hands on experience from Pro Stock driver Kenny Delco.

“I am excited to get to Orlando and take my shot at getting my Pro Stock license,” said Callahan, who owns a number of businesses in North Texas. “I have to thank Ron Capossela and Artisan Coffee for this chance as well as Alan Prusiensky and Prusiensky Racing. Alan and Kenny Delco have shown me the ropes for the past couple of years and now I am going to take this great opportunity. We will see what happens in Orlando but I couldn’t be more excited.”

Callahan has loved classic cars and street rods for years, so much so that he would occasionally attend car shows and test and tune events racing for fun. His passion and interest in racing grew when a business acquaintance introduced him to Capossela, the founder of Artisan Coffee and sponsor of Kenny Delco’s Pro Stock entry three years ago.

Because of their shared interest in race cars, Capossela invited Callahan to spend some time working with Delco’s Pro Stock team.

Callahan talked with Delco about earning a license and was referred to Prusiensky.

Prior to last season, Callahan joined Prusiensky Racing with an eye on getting behind the wheel himself. Prusiensky offered tips and advice as the 2020 season progressed, and as the season wound down Callahan began to get some practice seat time familiarizing himself with the race car and executing short burnouts.

He was not able to schedule the time to earn his license in 2020, so prior to the World Doorslammer Nationals he will make the necessary runs and then compete in the second annual specialty event.

“I learned a lot from Kenny and Alan over the years and we were hoping to get my license after the Las Vegas National event but it didn’t work out,” explained Callahan. “This is a dream come true and I am so thankful for the support from my family, especially my wife Sue, so we will see how it goes. I am focusing on getting my license for Orlando and the Gatornationals right now.”

“I am excited to see Mike behind the wheel. This is a dream come true for him and we are happy to be racing with him,” added Prusiensky. “This is a tough class, so having a teammate on the track during qualifying and race day will make our eCarMover Dodge Dart team stronger for sure. We are going to give it our best in Orlando and be ready for the Gatornationals the next week.”

The two car tandem of Prusiensky and Callahan will be racing under the Prusiensky Racing umbrella running Dodge Darts with Mopar Hemi engines built by A.R.C. Engines.

Here’s the scoop on We Buy Ugly Houses works … and...

Here’s the scoop on We Buy Ugly Houses works … and...