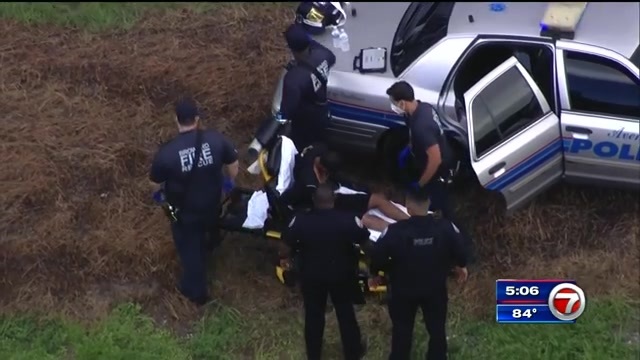 HALLANDALE BEACH, FLA. (WSVN) – Aventura Police officers came under fire after a reckless driver they were following crashed in Hallandale Beach, prompting a search that ended with two men in custody, officials said.

According to Aventura Police, the officers were on Biscayne Boulevard near Aventura Mall when they spotted a red sedan in front of them. Investigators said the driver of that car appeared to notice the officers and suddenly took off.

The officers followed the motorist as he drove recklessly while heading northbound along U.S. 1. Shortly after, police said, the vehicle crashed into the median across from Gulfstream Park.

Investigators said two men inside the vehicle got out and took off running near Southeast Ninth Street. While on the run, police said, one of them fired shots at the officers, but no one was hurt.

Both men were taken into custody and checked out by paramedics for possible injuries.

Police were able to recover one firearm at the scene.

The scene has since been cleared.

Police said they are attempting to determine why the men took off in the first place.

Copyright 2021 Sunbeam Television Corp. All rights reserved. This material may not be published, broadcast, rewritten or redistributed.

News Reporter - April 11, 2021 0
An inaugural 5k race will be held in honor of a man who was found dead in Horry County just over a month...