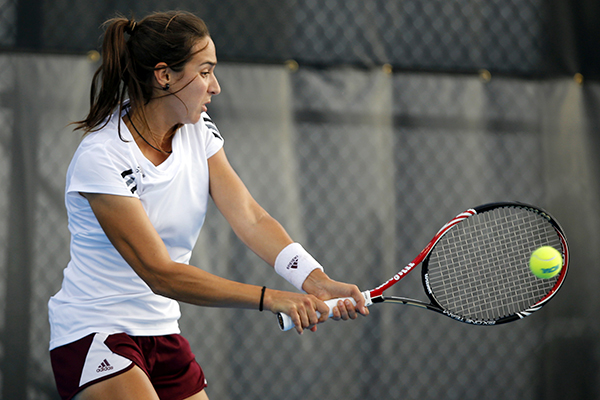 Sanchez-Quintanar, 32, has spent the past five seasons at UCF and was named national assistant of the year by ITA in 2019.

“After spending some time with Cristina, it was clear to me that she is deeply passionate about the sport of tennis and committed to the success of her student-athletes,” Arkansas athletics director Hunter Yurachek said in a statement announcing the hire. “She is a hard worker and incredibly competitive. Those traits served her well as a three-sport student-athlete in the SEC and have been hallmarks of her coaching career as well.

“As a student-athlete and then a coach, Cristina has been successful at every stop in her career. She was instrumental in assisting Coach (Bryan) Koniecko in building a national women’s tennis power at UCF and understands what it takes to build and maintain a nationally competitive tennis program.”

Sanchez-Quintanar played tennis, basketball and soccer at Texas A&M between 2011-14. She was the SEC singles champion and an SEC doubles champion in 2013, when she helped the Aggies to a national runner-up finish.

The Spain native was a two-time All-American as a tennis player and is the only Texas A&M female athlete to qualify for the NCAA Tournament in three sports.

“I am looking forward to start working with this group of young ladies and help them with their development on and off the court,” she said. “I understand the challenges that come with this position at such a prestigious university and conference. I cannot wait to put my feet in Fayetteville and take over the opportunity of putting this Razorback family back at the top.”

“It has been a tremendous journey and such a pleasure to work alongside Cristina these last five seasons,” Koniecko said. “Cristina has played an integral role in the success of UCF women’s tennis and helping us climb to a top-10 ranking.”

Sanchez-Quintanar is replacing Courtney Steinbock, who resigned last month following an arrest in connection with public intoxication in Madison County. Steinbock led the Razorbacks to the NCAA Tournament this year.