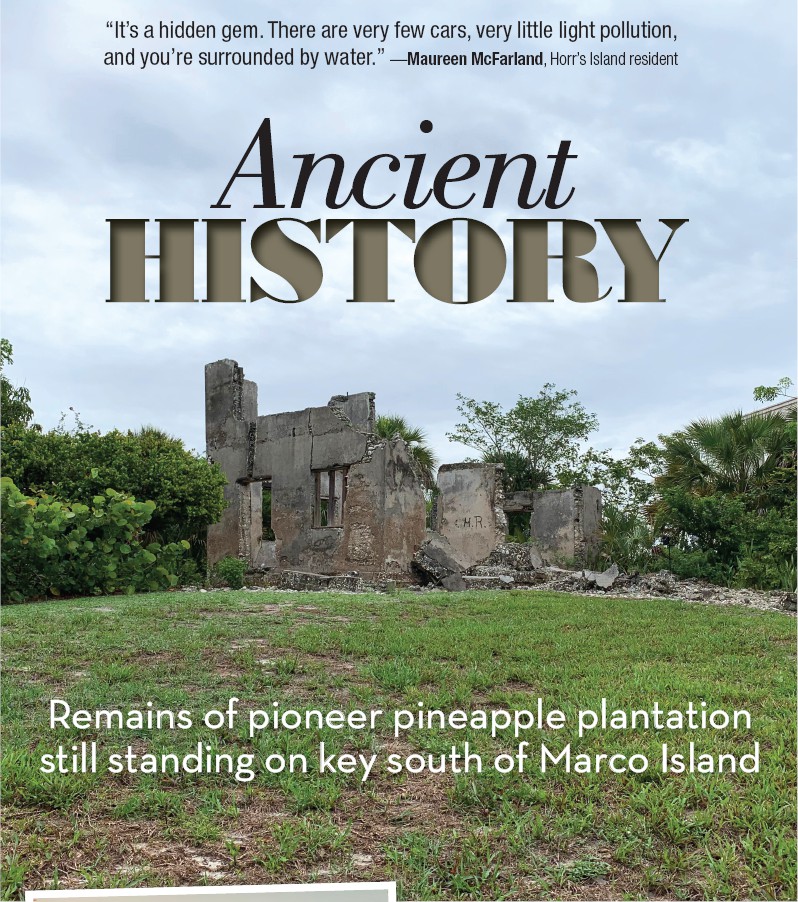 Top: The remains of Capt. Horr’s home as they appear today. The house was constructed of tabby, a mixture of sand and shells.

Before Florida became synonymous with oranges, it was known at the turn of the 20th century for growing and exporting pineapples.

Locally, Horr’s Island near Marco was the site of a large pineapple plantation. Parts of the two-story plantation house built in 1877 remain standing today. Pineapples even still pop up here and there around the island.

Captain John Horr, originally from Ohio, was working in Key West by 1876. A Civil War veteran, collector of customs for the Port of Key West, U.S. Marshall and Republican nominee for Secretary of State of Florida in 1900, Capt. Horr operated a wholesale grocery business in Key West that, in part, served ships going by.

Just as people vacation in Southwest Florida today, Capt. Horr purchased Horr’s Island and used it as his vacation property from 1877 to 1920 for himself, his wife, Lucinda, and their granddaughter, Hortense. He also took advantage of the pineapple craze and started the plantation.

His two-story house was made from tabby, a mixture of sand and shells from nearby Calusa Indian mounds. This strong building method has helped the house withstand many hurricanes over the past 144 years. 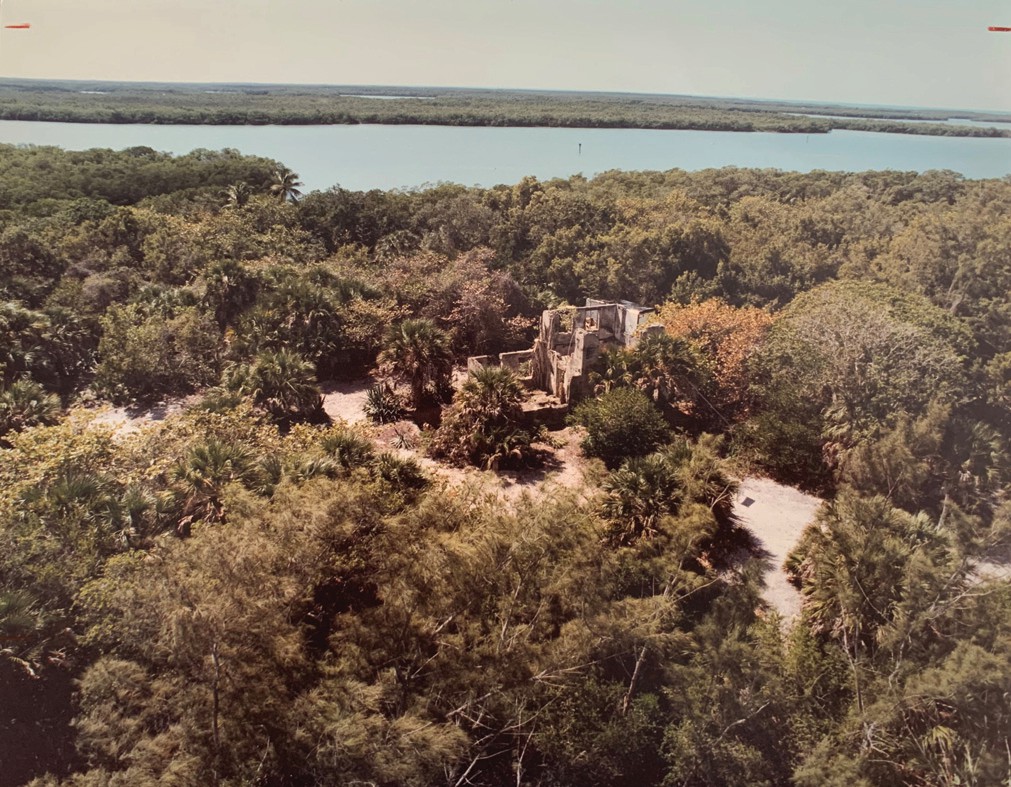 Above: An aerial photo of Horr’s Island.

So many people lived on the island to help with the plantation and packing plant, there was even a school for all the children.

The Horr’s Island plantation ruins joined the National Register of Historic Places in 1997.

“It’s an amazing and rare example of the history from that pioneer era,” says Austin Bell, curator of collections at the Marco Island Historical Society. “As more and more development occurs in and around Marco Island, places like these need to be protected and are literal connections to our past.”

Ann Dilbone, who grew up in Ohio and is a great-great-granddaughter of Capt. Horr, was unaware of her family connection to Horr’s Island until an uncle visited in the early 1960s. 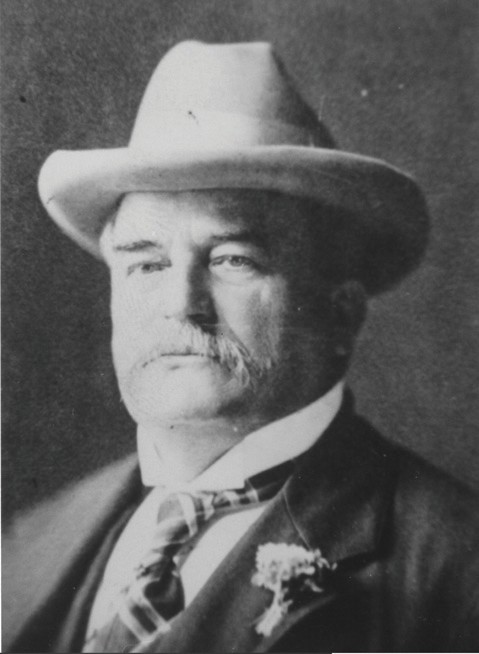 “My uncle called and said we owned an island down here,” she recalls. “I said, ‘What are you talking about?’” Neither her mother nor her grandmother, Hortense, had ever mentioned it, she adds.

Ms. Dilbone, who eventually moved to Naples and taught at Poinciana Elementary School for 24 years, first visited Horr’s Island in the mid-1960s. She had to take a boat to the uninhabited island and climb up the side of a hill (a bridge to the island was built in 1994).

“The two floors were still standing,” she says. “It was in collapse with a tree growing through it.”

Many people associate the Collier family, descendants of Barron Gift Collier, with having long ties with the county. Ms. Dilbone’s friend Judy Sproul, a granddaughter of Mr. Collier, was surprised to hear of Ms. Dilbone’s own long-time family connection to Southwest Florida.

“We were at dinner one night when I mentioned Horr’s Island and asked Judy if she’d like to see it. I picked her up one day and drove down there. I explained to the man at the gate who we were. He said, ‘You’re the great-great-granddaughter of Captain Horr. May I shake your hand?’ Judy, who has all the history there is in Collier County, now knew there was other history besides her own,” she laughs. 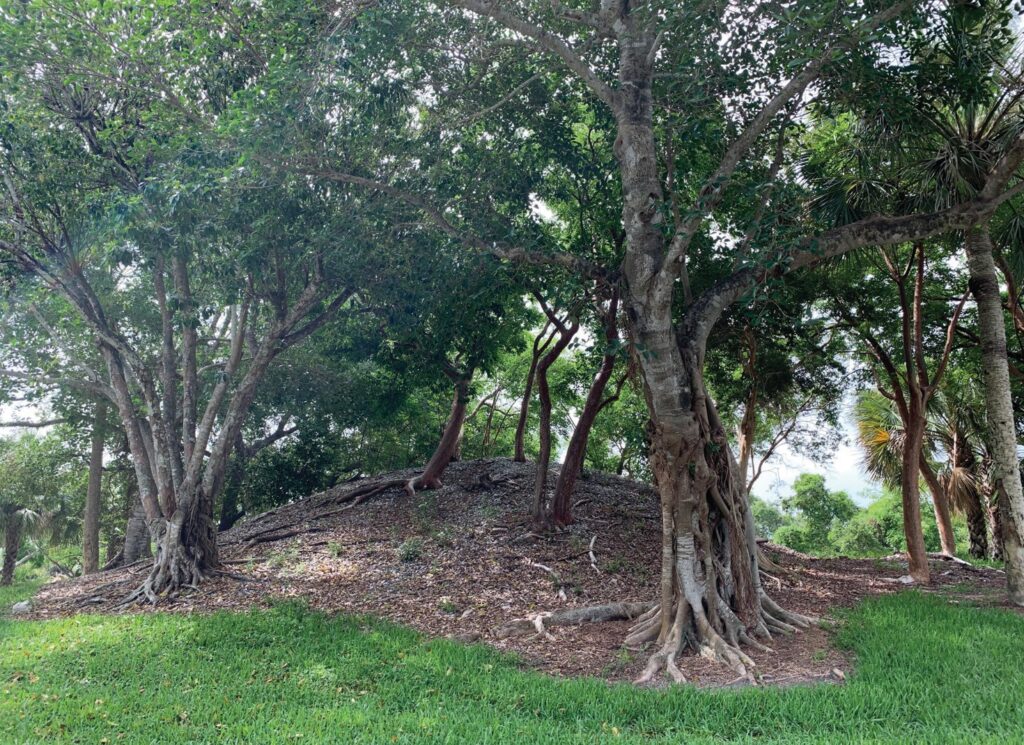 Evidence of human occupants on the island pre-dates both families, going back 6,700 years.

Research also shows that the Spaniards unsuccessfully tried to convert the Calusa Indians during the 16th century and left in the early 1570s. Until the late 18th century, Spanish-Cuban fishermen built fishing camps in the region for seasonal use.

Today, part of Horr’s Island is a development called Key Marco. There are 30 homes, four more under construction, and about 100 lots for sale, including one that contains a historic shell mound that was carbon dated to 4,000 BC. The island is extremely hilly. The Horr plantation house sits 23 feet above sea level. The top of a shell mound that sits between a split in Blue Hill Creek Drive is 43 feet above sea level. 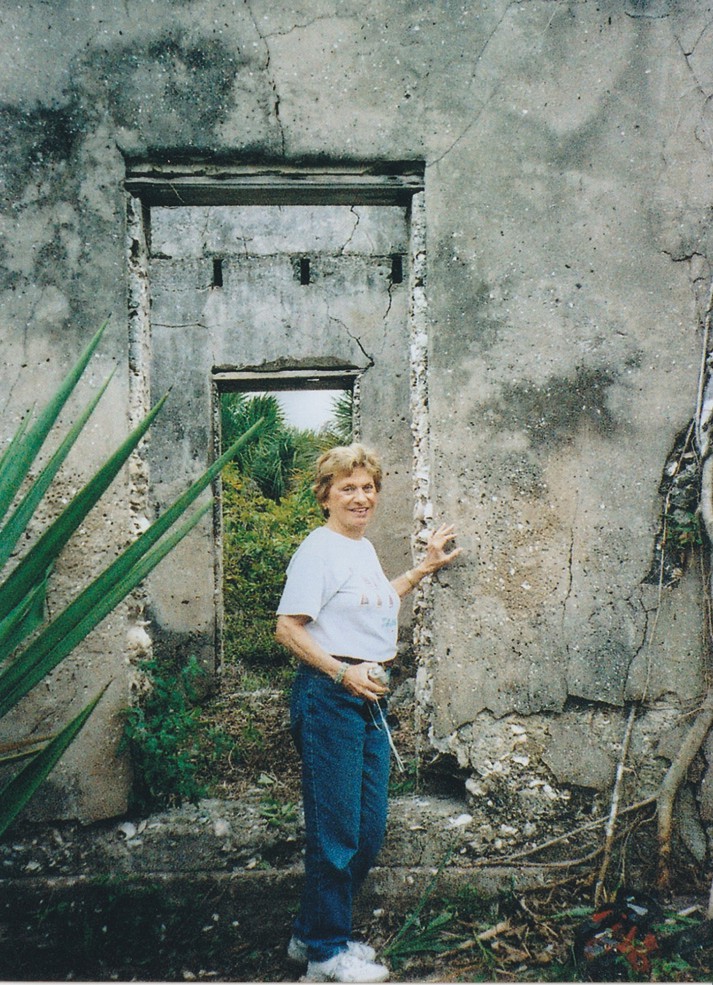 Maureen McFarland and her husband, Richard McDonnell, live full time on the island that sits on the southeast side of Marco Island and adjacent to Cape Romano facing Barfield Bay. Ms. McFarland notes that their house is the last one on the island and that there are no other houses south of theirs until Key West.

“It’s a hidden gem,” she says of Horr’s Island. “There are very few cars, very little light pollution, and you’re surrounded by water.” A gated entrance and small bridge give residents and their guests access to the island.

Ms. McFarland and her husband felt a sense of stewardship for the historic land and purchased two lots adjacent to their home to protect them from development.

“We need to take care of our environment,” she says. “With the Indian mounds and the plantation ruins, it makes me realize that time goes by and for this little time we’re here we have to make it a better place to live.” 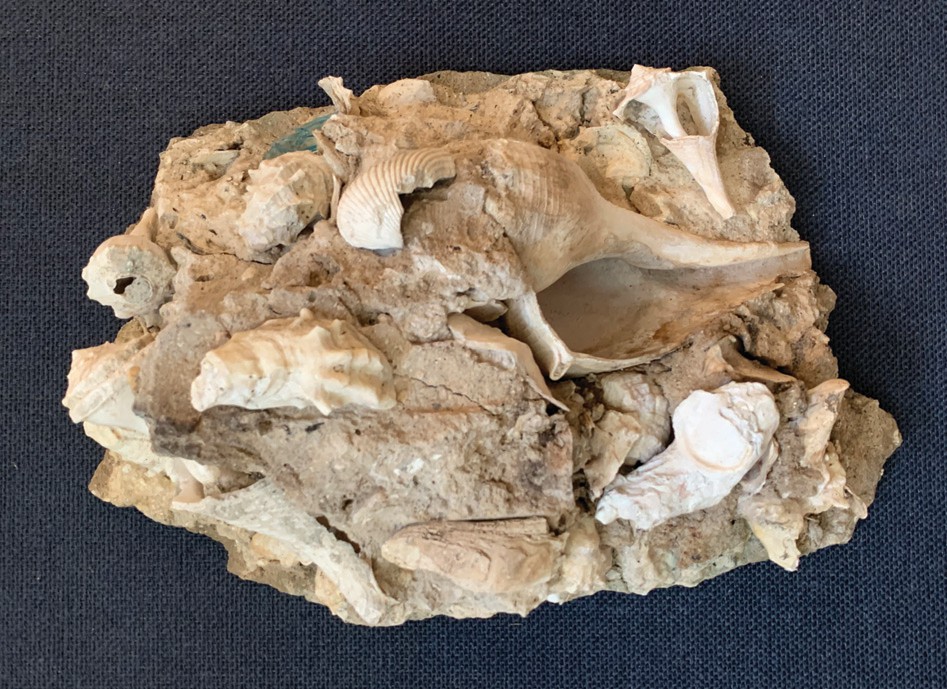 An example of tabby, the material made from sand and shell used to construct Capt. Horr’s house. ROBIN F. DEMATTIA / FLORIDA WEEKLY

She recently completed the Master Gardener program and is enthusiastic about the native and historic plants on Horr’s Island.

She says the residents enjoy seeing 12 bobcats that live on the island as well as many gopher tortoises. Butterflies are abundant, attracted by all the undeveloped areas flourishing with plants.

Near where the pineapple plantation docks once sat is Barfield Bay Docks, which offers about 100 slips and a five-minute ride to the Gulf of Mexico.

With just one road on Horr’s Island, residents pass the plantation house ruins and shell mounds often. For Ms. McFarland, these sights are a reminder of the very special place she lives. 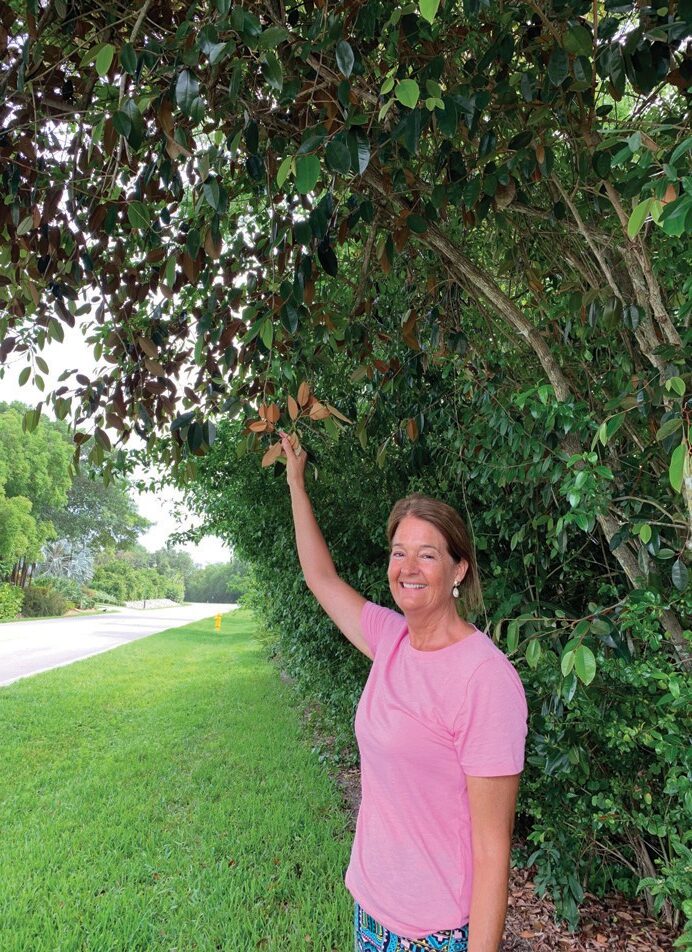 “The more I learn about our local area, the more beauty I find,” she says. ¦